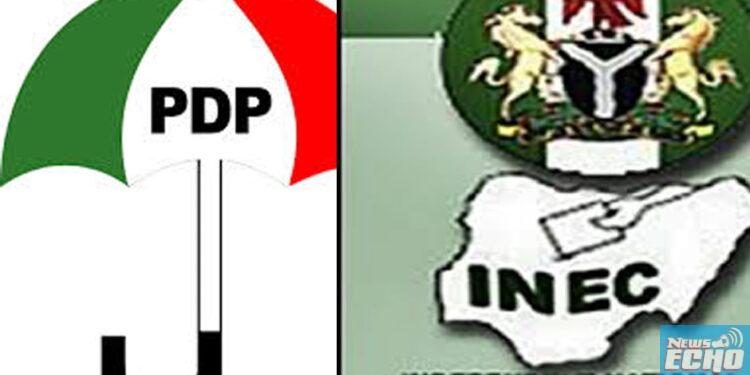 A Federal High Court sitting in Zubwa, Abuja, has barred the Imo State chapter of the Peoples Democratic Party (PDP) from using the contrived result of the 3-man adhoc delegates election results for the state which were not conducted in the election of candidates.
Justice Bello Kawu granted the preservative order after listening to a motion exparte filed by Mrs. Chidinma Nancy Uzomba, an aspirant cleared by the PDP to contest the election for Ideato Federal Constituency.
She approached the court following the alleged stealing of the result sheets of the two Local Government Areas by Chief of Staff to PDP National Secretary Sam Anyanwu and non-conduct of the delegates elections in the entire state and the controversy of a list being pushed by the National Secretary of the Party, Senator Samuel Anyanwu as delegates for the election.
In the suit No: FCT/HC/BW/CV/1450/2022, the claimant listed the PDP and the Independent National Electoral Commission (INEC) as defendants.

The motion was accompanied by an affidavit of urgency deposed to by Maliki Sylvanus from the law firm of Chief Mike Ozekhome (SAN).

Justice Kawu after listening to submissions by counsel to the claimant, Daniel Edachi further restrained the Peoples Democratic Party and the Independent National Electoral Commission INEC from recognizing any result emanating from the 3-man ad hoc delegates election in Imo State and or including any person(s) purportedly elected in the said 3-man ad hoc delegates election held on the 30th day of April, 2022 or any other date from voting or participating in the election of the candidates of PDP for elective offices in the forthcoming primary election of the party pending the hearing and determination of the Motion on Notice.

The Judge also granted an order restraining the PDP from allowing, recognizing or giving effect to any purported delegates emanating from the stolen and or missing result sheets of Ideato North and Ideato South Local Government Areas 3-man ad hoc delegates election to vote in the primary election of the PDP in both Local Government Areas for the purpose of electing candidates for the 2023 general elections pending the hearing and determination of the Motion on Notice.

The order further bars INEC from accepting from the PDP any list of candidates from Imo State who emerge from any primary election held with the list of the ill-fated delegates list.
By this ruling, the Court has barred the PDP from conducting any other 3-man ad hoc delegates election and therefore leaves the party only with the option of conducting its primaries in the state with only the statutory delegates list.

Lawyers who hailed the judgment as an end to impunity in party politics said that all the 27 House of Assembly, 10 House of Representatives and 3 Senatorial candidates of the Party risk being disqualified and excluded from the election id the PDP does not strictly obey the orders of the Court as that was the fate that befell the APC in Rivers State which led to the Supreme Court excluding all its candidates from participating in the 2019 general election for not obeying an order of Court.

Also, leading House of Representatives aspirant for Ideato North and South Federal Constituency and opposition coalition spokesperson, Ikenga Imo Ugochinyere described the judgment as victory for rule of law and a second chance for the PDP to save itself from technical exclusion.
The judge also granted accelerated hearing in the Suit, ordered abridgment of time for parties to file their processes and adjourned the matter to May 13, 2022 for hearing.

In an eight-page report on the Imo State PDP 3-man Ward Delegate Congress scheduled for Imo State on April 30 signed by the Resident Electoral Commissioner, Imo State, Prof. Francis Ezeonu, and which listed the observation of the Commission in each of the 27 Local Government Areas in the State, the Commission concluded that “Given the above, the PDP Imo State Congress will not be said to have substantially complied with the relevant laws and guidelines guiding the conduct of ward congress for the election of delegates.”

While some party officials in some of the Local Government Areas claimed to have done consensus or affirmation or harmonization, the Commission rejected that on the basis that the process adopted by the Party violated the provisions of the Electoral Act.

The report states: “it is pertinent to state that consensus/affirmation is one of the methods approved for the selection of candidates or delegates. However, even when parties have agreed to adopt the consensus method, proper Congresses should be held to affirm the chosen candidates or delegates in a free, fair and credible process. This was observed in the breach in this instance.”

The report also confirmed earlier reports that there were no original result sheets brought to the Congress venues and also corroborated that the result sheets for Ideato North and Ideato South were missing and were not seen by any person and also were not among the twenty-five result sheets deposited with the State Command of the SSS by the PDP.

“In almost all the instances the monitors claimed that no original result was brought to the venues. The absence of materials including the sensitive ones (result sheets) as reported by all the electoral officers in all the ward venues where the congress was to hold cast a lot of doubts on the exercise,”the report concluded.

Furthermore, The Appeal Panel of the Peoples Democratic Party (PDP) has upheld the disqualification of two aspirants seeking to contest the National Assembly elections in Imo State.
It, however, reinstated three other aspirants disqualified last week by the PDP Screening Committee from contesting the party’s primary election ahead of the polls.

Ikenna Ugochinyere and Uche Odunzeh lost their appeals before the panel while the trio of Tony Abili, Pascal Obi, and Collins Ilo, were eventually cleared.

The three-man panel led by Chisom Nwali with Augustine Osah and Solomon Nahum as secretary and member respectively, announced its decision in its report submitted to the party’s national leadership.
Ugochinyere, the spokesperson for the Coalition of United Political Parties (CUPP), is aspiring to vie for the Ideato North/ Ideato South Federal Constituency seat while Odunzeh has declared interest for Orlu/ Our/ Our East Federal Constituency seat – both in the House of Representatives.

In the report, the panel explained that Ugochinyere’s disqualification by the screening committee bordered on gross misconduct and dual party membership, and the petitioner neither appear before it nor send a letter of defence.

“One must be a member of a political party to contest election in that political party,” the panel resolved. “The respondent has not shown good cause that the only party he belongs to is the Peoples Democratic Party.
“The panel therefore resolves that the respondent is not cleared to contest for the Ideato North/ Ideato South Federal Constituency (election).”

Giving an update on Odunzeh’s case, the panel said although the aspirant did not appear before it, he sent in a defence to the petition.
According to it, the case of being an ex-convict is a very serious one which the PDP has overtime taken a serious stance on.

It added that its decision to uphold Odunzeh’s disqualification was in line with the provisions of Section 66 (1) (a) of the Nigerian Constitution.

Star Power: The Difference Between Entertainment and Knowledge