0
SHARES
394
VIEWS
Share on FacebookShare on TwitterShare on Linkedin

About 25 years ago, a little, innocent boy, Anthony Ikechukwu Okonkwo, aged 10, was gruesomely murdered for ritual purposes at then famous Otokoto Hotel, around Amakohia in Owerri, Imo State. All controversies surrounding the ritual murder and the rigorous judicial processes that led to the conviction of key actors in the ritual murder are all history now and very much in public domain.

Meanwhile News Echo in its developmental journalism mission deemed it feat to take a retrospective look at the incident, especially as it concerns the mother and other family members of the victim. This informed the decision of the newspaper to trace the whereabouts of the mother of Okonkwo. Applying its network of contact, your ever refreshing newspaper got a lead-way that Mrs. Okonkwo was currently residing at Ihube Okigwe. Events moved fast and poverty stricken Mrs. Okonkwo with misty eyes, shaken feet and heart full of sorrow agreed to talk to the team of News Echo about her fallen world.

What you may need to know about the mother and family of late Ikechukwu Okonkwo
The name of the mother is Mrs Patricia Abel Okonkwo. Her maiden home is Ozara in Ihube, Okigwe LGA. She was married to Ndi-Aniche, Aro-Ndizuogu, Ideato North LGA both of Imo State. Her husband, Mr. Abel Okonkwo died after she had given birth to their last child Chiadikaobi Okonkwo. Contrary to reports and insinuations widely believed, Ikechukwu Okonkwo was never the only child, but first of seven children of Late Mr. Abel Okonkwo and her wife.

That means four boys and three girls. Mrs. Okonkwo ran away from her husband’s family house when the persecution from the husband’s elder brother became so intense and coupled with the fact that she was not finding it easy to carter for herself and the seven children, even as they had no house of their own. By the time he ran back from the husband’s house to her father’s house, her elder brother, Mr. Jonathan Okwuobasi Okoronkwo, a fashion designer who took it upon herself to help her by taking Ikechukwu with him to Owerri where he resided at No. 4, Amakohia, so he (Ikechukwu Okonkwo) could be sent to school. It was from that point little Okonkwo got into trouble.

Hawking, Otokoto and Okonkwo’s end
From the chat with Mrs. Okonkwo, it was revealed that the sister in-law, cooked groundnut and sent Okonkwo to go and hawk on the streets of Amakohia, Owerri. It was while hawking groundnut on the streets of Amakohia that he was lured into the Otokoto Hotel in the guise of buying groundnut, where he was killed, his head chopped off and his severed body buried in a shallow grave in the compound of Otokoto Hotel. This incident brought to fore what had been happening in the state unraveled before then. It is on record that while the cartel involved in ritual murder, obtaining by tricks, (popularly known as 419) showed off their affluence, became lord and law unto themselves and the society at large.

As it was people, especially children were disappearing in the manner of Okonkwo’s case. The law of karma finally caught up with them and other atrocities of that era were brought to fore and all those involved or suspected to be involved in the ritual money making syndicate were fiercely descended upon by the masses, whose anger were already built-up. Everything associated with them were vandalized and looted as most of their houses were ransacked in search of incriminating evidence to prove their involvement in the ritual money practice. They all ran away from the state as the people’s anger raged for days, uncontrollably.

Mrs. Okoronkwo’s pitiable condition
The situation has remained the same for almost 25 years. She is still at her father’s house. Though the husband’s elder brother who persecuted her and her children is now late and his (the elder brother’s) son has been showing them kindness, coming to visit them whenever he comes home for Christmas celebration, the inhibiting factor preventing them from going back to her husband’s house (his children’s ancestral home) remains the lack of house to shelter them. She has also been facing persecution in his father’s house as one of her father’s brothers and his family have connived with his late brother’s wife, (the very woman that sent Ikechukwu to hawk groundnut, where he met his gruesome and untimely death) to meet out to her, the worst persecution of her life.

They have been ordering her and her children to leave the father’s house and go back to the husband’s house, threatening that if they fail to leave in life, they will leave in death. Mrs. Okonkwo narrated that just this past December, they connived to fight and brutalize her, inflicting serious bodily injuries on her. She lamented that the immediate younger brother of Ikechukwu is currently insane.

The madness according to Mrs Okonkwo is generally suspected in the family circle to have been projected diabolically by the same family that has been persecuting the woman and her children. According to her, “He has been threatening that time shall come when my son will no longer recognize me. Within that time we started seeing fetish substances around the compound before my son gradually started running mad. We have tried our best in looking for solution to the problem, all to no avail”. The most pathetic aspect of the whole incident is that his brother’s wife who is still based in Owerri with his children, went and chased the very son that was running mad out of the room he stays, making him to run into the bush. 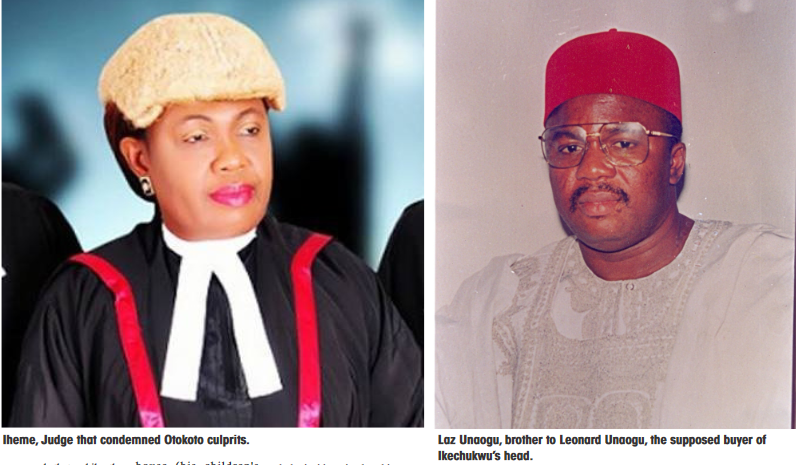 Abandoned: Buffeted by wind, scotched by sun, drenched by rain and forgotten by successive governments
In a sane society, this family would have been adequately taken care of by both the government and Non Governmental Organizations, NGOs. But this is not the case here. The poor woman and her children, without their father, are left and abandoned to their fate. The family has no shelter. No meaningful source of income because no person, group or government has ever come to their aid.

How could such a case which attracted international attention be left to just die like that and victims left unprotected and uncared for? How could this woman be left to be going through all that she and her children has been going through in the hands of wicked relatives, including the very woman that sent her son to his untimely grave.

In such a case which became a state and national issue, one would have expected that the victim’s family would have been given the best condition of leaving, if not for the fact that their son was killed in that manner, but for the fact that the case attracted international attention to Imo State for the very bad reason. It should have been in our consciousness that that case will remain a reference point, as scholars and researchers would from time to time want unearth some facts about the incident and the family of the victim.

Only N200, 000 received
According to Mrs Okonkwo, while the case was ongoing, she was being invited and each time she was going to Owerri, she would do menial jobs to get money for transportation to Owerri. “During that time, they enquired what should be done for me as compensation for the death of my son, I requested for house, since we had none and assistance in training my younger children. My elder brother was the person running around and seeing to the case. He later informed me that two hundred thousand naira (N200, 000) was paid as compensation. That was all the help that came our way as a result of the incident”.

Mrs. Okonkwo’s situation is pathetic
With all the troubles she has been through, she currently relies on menial jobs for her daily bread. Apart from her second son who is currently running mad, her third son is in the village, also doing menial jobs, like mining of local stones for a living, while the last son who is equally the last born, Mr Chiadikaobi Okonkwo is currently learning ladies’ shoemaking at Powerline, Aba, Abia State, from where he came back to join his mother in receiving News Echo crew. The ladies are said to have all gotten married, but probably not to well – to – do men who could assist the family financially. She regretted that if Ikechukwu had been alive, with the type of enterprise spirit he exhibited at the early stage of his life, the family’s case wouldn’t have remained the same.

Hearing from her last born, Chiadikaobi Okonkwo (a shoe maker who specializes on ladies shoes), said he was still in dippers when Ikechukwu was gruesomely killed, explained that they had got trips of sand on the portion of land allotted to them to build house at Arondizuogu, Ideato North Local Government Area, Imo State, their native home, by their folks. He begged for assistance so as to commence the construction of the building in order to settle down finally.
“I will be glad going back to my father’s house. Although, we have made a positive move to build house on a portion of land given to us at our native home, Arondizuogu, but we need money to start building the house, so that we can have a place to lay our heads. I just finished learning shoemaking work at Aba. The death of my elder brother left a devastating blow on us and we are yet to recover from that rude shock”, Chiadikaobi said emotionally.

While her brother, Ike Anthony Nnodumele and his wife, Felicia Anthony Ike, mentioned that Ikechukwu’s mother’s ordeal was compounded by the mental derangement of her second son, who they said became ill six years ago after he was threatened with madness by one of his mother’s kinsmen over a portion of land. “It is another problem to her. Originally, the second son was working as a security in a private firm before he got mentally ill. We have explored available means to revive him, but to no avail, having run short of money. We hope to revive him mentally if there is money. It is unfortunate that our late elder brother, Jonathan Okwuobasi Okoronkwo, who lived with Ikechukwu Okonkwo in Owerri, died in 2019”. Adding his voice , another family member, Chinwendu Okoronkwo, a miner, said that the woman needs help from government and well- to- do- individuals to enable her assuage her misery and sorrow. He frowned that some persons had laboured to evacuate her from her father’s house, but shamefully failed.

2023 and imperative of political restructuring