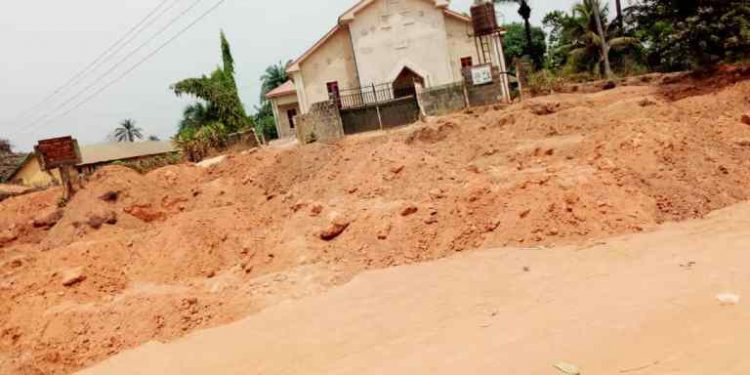 After sustained reports by different media houses, the erosion menace threatening the people of Umunwanwa community in Umuahia South LGA of Abia State has attracted the attention of the federal government.

To this end, the Anambra/ Imo River Basin Authority, a parastatal of the federal government has commenced works on the deadly site, to reclaim valuable lands that had been destroyed deep gullies.

Before now, Umunwanwa people seemed to have exhausted every available effort to salvage their lands, as the menace continued to widen in size on daily basis and claimed both human and material victims.

During rainy season, owners of cars and other big vehicles avoided using roads that pass through the precarious road, to avoid plunging into deep gullies.
St Peter’s Methodist Church, a strategic and monumental building in the community was also under threat of joining other houses that collapsed into the menacing gully.

But after the intervention of various media houses, both print, electronic and online platforms, the Anambra/Imo Water Basin Authority has awarded two contracts in the Abia community, one for control/ recovery/rehabilitation works on the erosion site and another contract for the grading of Umunwanwa–Mgbarakuma–Ubakala road, also in Umunwanwa.

When News Echo embarked on fact-finding trip to Umunwanwa, works were observed to be going on, to the relief of natives.
Some villagers who spoke to the reporter thanked the Anambra/Imo Basin Authority for intervening on their ecological challenges, and appealed for quality jobs.
“I will be happy to see this gully closed in my lifetime.

It has caused several accidents, claimed our valuable livestock. Our individual and collective efforts as a community all these years were not enough as the size and depth increased every year”, said Mr ThankGod Ozoemena, an elderly man from Umunwanwa.

He called for quality job on the site and also appealed for a speedy completion of the job before the rainy season.
“This place is a no-no area during rainy season and that is why the ongoing job should be concentrated now we are in dry season.”
Apart from tackling the erosion gully, contract for rehabilitations (grading) of Umunwanwa–Mgbarakuma–Ubakala road to ensure smooth human and vehicular movements into Umunwanwa.

The contracts being handled by Prime Design and building engineering Ltd, was awarded in late 2021, by the Managing Director of Anambra/Imo Basin Authority, Engr Gerald Osuagwu.

The site engineer of Prime Design and Building engineering Ltd, Engr Uche Ihueze assured that job would be delivered according to specification.
Umunwanwa has boundary with Isiala Ngwa North LGA of Abia State and also has a boundary with Mbaise, Imo State.

An indigene of Umunwanwa, Hon Jerry Uzosike who incidentally, is the member representing Umuahia South constituency in the Abia House of Assembly, was accused by some constituents, including Journalist Uche Nwosu, of allegedly playing the ostrich while his people suffered risked being swallowed by gully.

These accusations, Uzosike denied, saying his efforts to solve the crises were thwarted by the non-capture of the erosion site in the 2021 federal appropriation.
News Echo Newspaper in had in December carried out a special report on the plight of the natives of Umunwanwa, occasioned by the erosion gully menace.