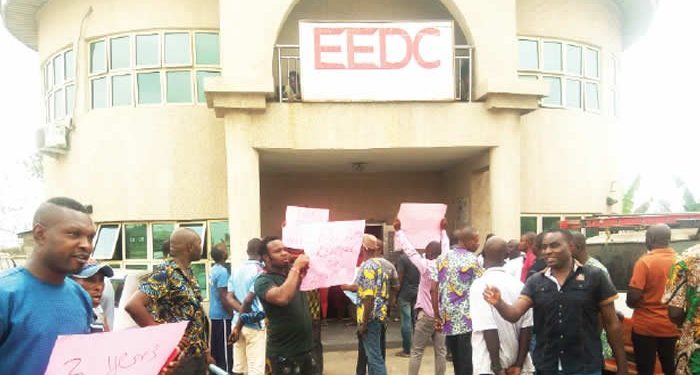 Members of the Iyiowa Odekpe in Ogbaru Local Government Area of Anambra State have protested against the continuous black out in the community, which they said has been over four years now.
They protested at the premises of the Enugu Electricity Distribution Company, Ogbaru District, along the Obodoukwu-Atani Road, Onitsha, on Wednesday, while lamenting that living conditions in their community had become unbearable claiming that they spend over N2,000 to fuel their generators on daily basis.

The community leader, Igwe Cyril Anochere, while addressing journalists at the protest venue, said despite the fact that the community had spent over N20million in buying three transformers, electric cables, poles and workmanship, the EEDC have failed to energize the transformer.

Anochere, in the presence of the EEDC top management staff, including the network manager, accused them of demanding N3million bribe before they would energize the transformer for the community.
He added that the community had become a ghost town as social, economic and commercial activities have been paralyzed as a result.

He said, “The reason we are here today, the network manager standing here knows about it. Our community has been without electricity for almost four years now. Do you know that, lately, we have spent over N20million rehabilitating and installing equipment that the EEDC are supposed to do?

FG to boost ginger farming in Abia, others

Qatar 2022: Profiling the 10 African teams through to the third-round playoffs (3)