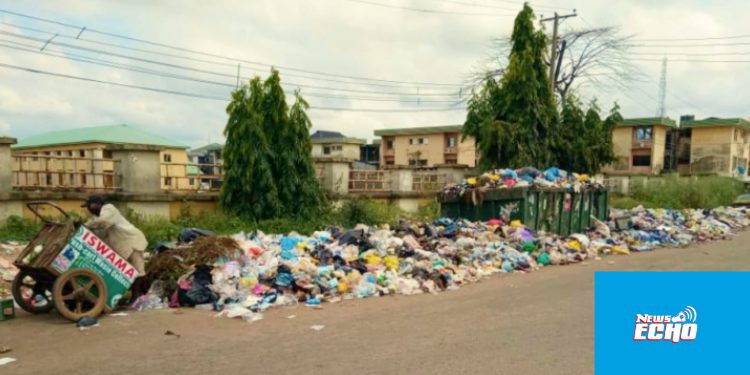 Imo was once the cleanest state in Nigeria under the regime of President Muhammadu Buhari when he held sway as the military junta. I am not sure that the present leaders in Imo neither are aware of this nor are they ready to re-enact the same feat. The sanitary condition of Imo has deteriorated since this administration emerged in Jan this year. The facts speak for itself.
When waste management was under the ENTRACO it was not as bad as it is at present.

Waste disposal in Imo we understand now is under the management of a new agency called Imo State Waste Management Agency (ISWAMA). The group has not been up and doing as the Imo people are currently exposed to the dangers un-disposed refused dumps.

One needs to take a trip around the city and observe the damage done to the health of the residents by the failure of government to discharge its responsibility towards its citizens. The importance of health among the people cannot be over emphasized. It is one of the cardinal constitutional responsibilities of government to protect the lives of its citizens, but we are alarmed that the Imo government is doing the contrary.

During the weekend yours sincerely stumbled on heaps of refuse that has for many days remained an eye sore to passers-by. The stench oozing out from them can choke anybody to death. The areas badly affected include the dumpsite in front of Ikenegbu Girls’s Secondary School, one at MCC/Uratta road, and another behind the back gate of the Imo State University.
When yours sincerely spoke to Nnamdi Okafor and Chinonso Duruaku, two young boys stationed to guard the people dropping the waste to avoid it occupying the road at the Ikenegbu Secondary School Owerri, they explained that the personnel that should evacuate the dump are owed 5 months arrears of salary and so abandoned duty post. In consequence, ISWAMA resorted to use of caterpillar which is broken down and need fixing.

These refuse dump sites are located within residential areas that generate magnitude of refuse on daily basis. The dumps must be cleared every 48 hours if the people must be kept free from its effects. The government has started that the agency was set up to turn the wastes into wealth and are collaborating with institutions like the FUTO but what we are seeing on ground appear to be the usual empty promises that characterize the activities of those in power with which they deceive the people.
Uzodimma, Imo people need a breath of fresh air. We have a right to leave if you cannot improve our situation don’t add to it.

Rallying Point with Chigozie Uzosike : The world is deceived by ornament