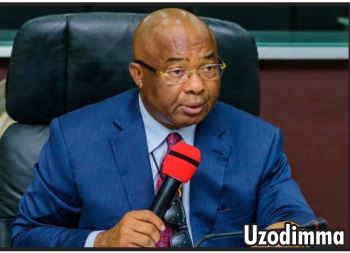 Imo state governor, Senator Hope Uzodimma wants to be celebrated for providing Imo workers vehicles to convey them to work. But feelers received from across the state appear to indicate that it looks like a misplaced priority. It would be recalled that last week Uzodinma bought over 100 vehicles for his aides and for conveying workers to offices. This has not gone done well with Imo people who are expressed their views to media men.

Reactions are already responding that this is not what Imo people want. At a period where workers salaries are not paid and the roads are terrible, they described what they called governors gesture as not meaning well for Imo people. According to a primary school teacher who simply gave her names as Nneka, ‘where is the governor’s prosperity he promised. What we are seeing is more poverty. Some of us have not been paid in 5 months. What does a hungry man do with bus? You people should tell him to pay us.”

The People’s Democratic Party (PDP) publicity secretary in Imo, Comrade Ogubundu Nwadike also in a press statement condemned the action of the governor which it described as misplaced. It queried the wisdom of the governor in buying vehicles that would get destroyed on the bad roads that dot the state. Virtually, everywhere in the state is challenged by bad roads which have limited economic activities.

A top civil servant who gave his reaction on the matter under the condition of anonymity had this to say. ”The wickedness of the governor located in his disdain for civil servants is manifest in his interest to be buying vehicles. He has bought cars for permanent secretaries, he has also bought fleets of cars for Covid-19, for security, for judges and now for his aides and yet the civil servants who are the engine room of governance are used as sacrificial lambs. They are interested in the projects which they will inflate or manipulate to get some money”

The governor speaking through the Imo Orientation Agency has stated that the vehicles are no car gifts to the aides but to aid governance in the state. Whatever reason it is designed to serve, Imo people appear not impressed.

Shouldn’t we impeach this Imo speaker?