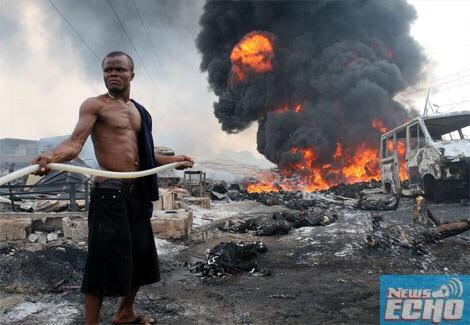 Ordinarily, a people rejoice, when oil deposits are found within their soil yet amidst the unprecedented wealth, enormous dangers and health hazards are buried within.

For instance, despite concerted efforts federal government and its concerned Agencies and Institutions, to curtail oil theft, within the country’s oil rich communities; its defiance is resulting in various degrees of calamities; last weekend, over 100 people were reportedly burnt to ‘roast’ degrees while many others numbering over 200 persons are said to be suffering various degrees of burn, after a blast at an illegal oil refining site in Abaezi community in Ohaji/Egbema area of Imo state.

The families of the blast victims are currently mourning their loved ones as many of fatalities are young men and young who are in their primes; though, many have blamed the rising spate of unemployment as causative of their engagement into the illicit and deadly ‘Oil bunkery’ deal which has today spelt excruciating doom for them and irreparable loss to their families; But, they could have said ‘No’ to this, most gigantic temptation of their life.

Obviously, the negative impact of illegal oil exploration otherwise referred to as bunkering is fast becoming suicidal and calamitous as the vessels and these illegal refineries, dotting the landscape of the Niger Delta creeks and other oil producing towns in the Southern part of the country, are very conspicuous and visible to be noticed, yet these illegal operations have been going on without any significant challenge from government or governmental institutions, including security agencies.

The Nigerian Upstream Petroleum Regulatory Commission (NUPRC) recently said, the country lost about $3.27 billion worth of crude oil to theft between January 2021 and February 2022.

In 2021, Nigeria lost at least $3.5 billion revenue to crude oil theft, a figure that represents 10 per cent of Nigeria’s foreign reserves. Oil theft and pipeline vandalism threaten oil exploration and accruable revenue. In 2019, the Nigerian National Petroleum Corporation (NNPC) announced that it lost ₦159 billion to oil theft and pipeline vandalisation. The losses were put at $2.8 billion in 2018. Although resources were appropriated to secure oil facilities, the activities of oil thieves continue unabated.

With these organized oil criminal gangs making off with billions in stolen crude, Nigeria, suspected to be Africa’s richest economy faces its worst oil crisis in years while these oil thieves are raking in‘petrodollars’ on high seas while FAAC flounders

For a country like Nigeria, whose oil industry generates about two-thirds of its revenue, oil theft is no small matter.
Nigerian Navy, recently announced, it has seized about 6 million litres of petroleum products worth over N3 billion from oil thieves since it launched Operation Dakatar Da Barawo (OPDDB), also known as‘Stop the Thief’

This, the Navy said through its spokesperson, Adedotun Ayo-Vaughan, was a headway to end oil theft and illegal refining yet the

The statement noted that the navy clamped down on illegal refining sites around Sara creek, Asugbo creek, and Ereweibio creek, among others, in a week.

“In furtherance of Operation DAKATAR DA BARAWO, launched by the Nigerian Navy on April 1, 2022, the Service’s unrelenting effort to check increasing crude oil theft and related acts of economic sabotage has recorded more arrests and seizures between April 15-23, 2022, being the third week of the operation. On April 15, 2022, Nigerian Navy Ship DELTA at Warri, deactivated an Illegal Refining Site around Sara creek,” the statement reads.

Similarly, sequel to series of air reconnaissance, Forward Operating Base FORMOSO in Bayelsa State on April 19, 2022, raided an IRS at Ereweibio creek in Brass LGA. Accordingly, seven large cooking ovens, 10 large metal storage tanks and drums all laden with about 400,000 litres of illegally refined AGO and 20,000 litres of suspected illegally refined PMS were discovered. The site also had five large pits holding approximately 700,000 litres of stolen crude oil. Equally, two pumping machines, one gasoline generator, one submersible pump and one chainsaw machine were discovered at the site and destroyed in situ.”

The statement added that an IRS at Lelemu creek in Warri south-west was discovered on April 21, 2022.

“During the operation, 19 ovens, 26 metal storage tanks and two dugout pit laden with about 250,000 litres of suspected stolen crude oil and 50,000 litres of illegally refined automotive gas oil (AGO) were destroyed,” it said.

“To ensure effective deactivation of IRS, NNS DELTA on 21 April 2022 conducted swamp buggy operations during which an earlier identified IRS around Egwa creek in Warri was destroyed.

“During the operation, 16 ovens, 31 metal storage tanks and seven large pits all filled with about 850,000 litres of stolen crude oil were equally deactivated.

It also noted that combing the area off Jones creek led to the discovery of another IRS with five ovens, two metal storage tanks and eight large pits with about 150,000 litres of sludge.

It said both IRS off Jones creek with the discovered items and products were destroyed in situ.

“Succinctly, Week three of the OPDDB saw the seizure of over 6,000,000 litres of products valued over N3 billion from oil thieves and economic saboteurs. The migration by operators of IRS from the South-South geopolitical zone to the South-East also comes to the fore,” it said.

“This development will in no way deter the Nigerian Navy from ensuring zero tolerance for COT, IRS, illegal bunkering and related economic crimes in the nation’s maritime environment and adjoining territory.”

Reacting to the incident, President Muhammadu Buhari ordered that the sponsors of the illegal refinery should be brought to book.