An Igbo proverb has it that no matter how hard you try to please your enemy, he will always see you in bad light. This is for all Ndigbo who erroneously believe that giving a support to your enemy can compel him to love you.
Again, another Igbo wise saying has it that charity begins at home. Taken together, why is that Ndigbo do not think inward politically? The last politician that got the overall support of Ndigbo for presidential election was the late Dr. Nnamdi Azikiwe and his Nigeria’s People’s Party, NPP. That was way back in 1979/83. Also, in 2003, Igbo youths rooted for Dim Chukwuemeka Odumegwu Ojukwu for president.

Although the late Dr. Alex Ekwueme made spirited efforts for the presidency in 1999 and 2003 elections, he never got the type of massive support that came the way of Zik in the 1979/83 general elections. It was almost a taboo for any Igbo to speak evil of Zik and NPP initiated the Second Republic. That was the major reason Ojukwu, despite his demigod influence and command, could not win the Nnewi senatorial election even on the platform of the then ruling National Party of Nigeria, NPN.

It is quite disgusting that despite the recorded and established hauls of marginalization against Ndigbo by successive governments in Nigeria, South East wards still cannot resist external political invasion. Rather, most of them, because of personal interest that are selfish, join forces with Igbo enemies to rape the zone.

For instance, why is it difficult for the South East governors to come together and make it an issue before President Muhammadu Buhari that the region is marginalized, excluded and politically raped? Why are the South East governors not talking about the railway projects that Buhari failed to bring a single line to Igbo country? Why didn’t they oppose the federal government when it labelled IPOB as a terrorist group and proscribed it? Where were they South East governors when the Buhari administration failed to name an Igbo into the country’s security architecture? Instead, they support Buhari. This is a part of the reason other zones do not take Ndigbo seriously.

Just recently, Buhari approved the promotion and appointment of eight justices as supreme court judges. As usual of Buhari and his APC government, there was no one from the South East. If there was no Igbo in the court of appeal, it goes to say that no Igbo was considered good for that position. Is possible that no Igbo was good really? 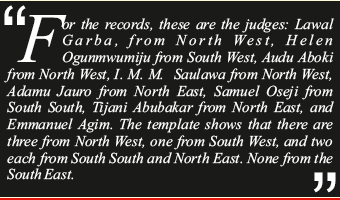