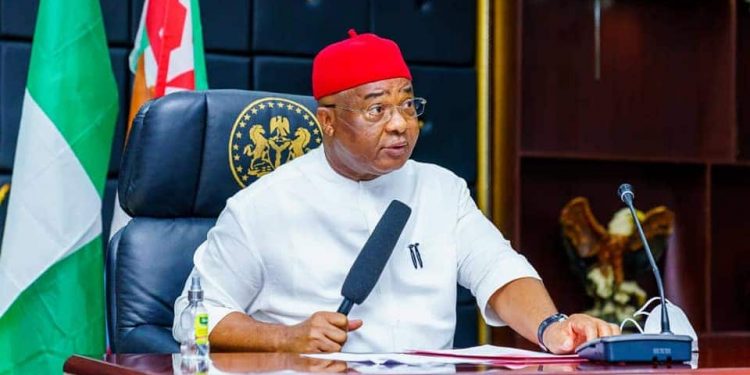 The National Coordinator of Ihedioha Solidarity Group, Prince Mike Akubueze has commended Governor Hope Uzodimma for his efforts in ensuring that property belonging to Imo people which were forcefully taken from them by a former Imo State government were restored to the original owners.

Last week, the Chairman of the Imo State Government White Paper Implementation Committee on Lands and Related Matters, Prof. Ukachukwu Awuzie, made public the property, names of individuals and organisations whose property were forcefully taken by the Government of Rochas Okorocha, indicating that such property had been returned to their original owners.

Prof. Awuzie spoke at a town hall meeting that attracted Imo indigenes (men, women, traditional rulers, church leaders etc) and organisations, and the position of government received instant applause from not only those whose property were forcefully taken by the Okorocha administration, but from all men who detest injustice.

In a release signed by the Chief Press Secretary/Special Adviser (Media) to the Governor of Imo State, Oguwike Nwachuku and made available to News Echo, it stated that Prince Akubueze who hails from Mbaise and popularly known as Asaigbo, said that Governor Uzodimma not only deserves commendation for such people–oriented achievement in the State, but has qualified for induction into the Igbo Hall of Fame Award usually organized by the Abuja-based Asaigbo Foundation.

“With the recovery of more than 1500 properties from Rocahas Okorocha and his cronies by His Excellency, Sen. Hope Uzodimma and subsequently returning them to their original owners, Sen. Hope Uzodimma deserves commendation,” Prince Akubueze wrote in a message he forwarded to the Chief Press Secretary/Media Adviser to the Governor, Oguwike Nwachuku.
Prince Akubueze who explained that his group has therefore found Governor Uzodimma worthy for reward noted that the Governor had been nominated to receive the 2022 Edition of Igbo Merit Awards at a date to be communicated to him later.

Prince Akubueze wrote: “The essence of the Merit Award is to identify, appreciate and encourage individuals and corporate organizations who have contributed in one way or the other to the development of Igboland in particular.

“We don’t need a soothsayer to tell us what these 1500 properties will do to the original owners whose properties were forcefully taken from them by Rochas. The funniest part of it is that these properties were taken away from the poor and given to the rich. “With this award, Governor Hope Uzodimma would be inducted into the Igbo Hall of Fame thereby joining other great sons and daughters of Igboland who have been bestowed with Igbo Merit Awards in the past.

Prince Akubueze, an Abuja-based businessman and politician and one of the staunch supporters of former Governor Emeka Ihedioha believes that his conscience will prick him forever if he fails to appreciate the good things which Governor Uzodimma has done, noting that the mark of progressive politics is calling a spade by the name.

Five governors may not complete tenure-Prophet