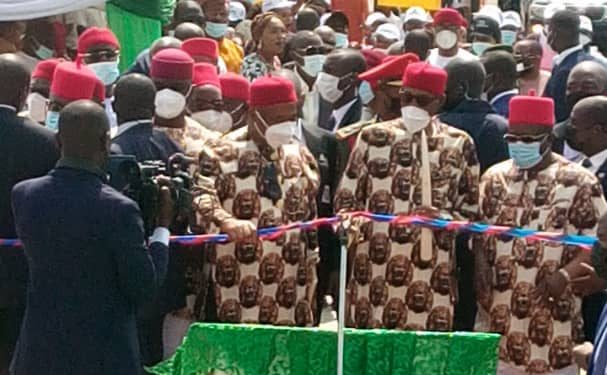 President Muhammadu Buhari says he saw enough developmental projects during his visit to Imo State and decided to testify that Governor Uzodimma was truly working hard.

“I want emphasize in the old saying that seeing is believing. I accepted this invitation to come and see what the governor wanted me to see. I have seen enough to testify that he is working very hard.

“I understand his plight because I am going through the same problem at the centre to make sure that infrastructural development is bequeathed to the country. I am pleased that by what seems like coincidence, my ideas matches with that of your governor.

Buhari expressed satisfaction with what he saw on ground and assured that the federal government under his leadership will make some more impact in Imo State.

In his address at the occasion, Imo State Governor, Senator Hope Uzodimma expressed optimism that President Muhammadu Buhari was now convinced that Imo people love him, judging by the massive turnout of Imolites to welcome him on arrival to a working visit to the state.

“I am sure that Mr. President now knows that Imo people profoundly love him, just as they sincerely appreciate him.

“In March this year, we commenced the harvest of commissioning of projects built by our administration. It is heart-warming to recall that Mr. President was the first to commission two strategic roads virtually. Today, he is here in flesh and blood to commission more and equally important projects. We give God the glory.

“When I assumed office as Governor of Imo state last year, I undertook a holistic study of the needs of our people. I found out to my horror that the infrastructure base of the state had totally collapsed.

Almost all the road network was broken. Owerri, the state capital was worse hit. Flood had sacked several parts of the city while in some areas, property owners had surrendered their property to flood, especially within the Dick Tiger and Chukwuma Nwoha road axis, where the base of the current Balloon driven tunnel is located.

“Mr. President, the state of Naze/ Ihiagwa/ Nekede/Obinze link road, was pathetic to say the least. The road was taken over by gullies, not potholes. It was nightmarish to the road users. And this is a strategic road that leads to two federal institutions of higher learning, namely Federal University of Technology, Ihiagwa, and Federal Polytechnic Nekede.

“The feeling was same for all those who used the road. To the glory of God, Your Excellency has just commissioned the first phase of this all-important road. The second phase which will be commissioned before the end of this year, will link the road to the Obinze end at the Porthatcourt express way”

The governor thanked the president for his effort in bringing the security challenge in the state to a halt, informing him that his government has reached out to the families of security personnel who lost their lives in the line of duty, as well as families of innocent citizens who were caught in the crossfire.

The Igbo socio cultural organization Ohanaeze Ndigbo Worldwide in an address presented by its President General, Prof. George Obiozor, expressed optimism that the president’s visit will mark the beginning of a new chapter of dialogue,
cooperation and understanding between Ndigbo and his
administration.

He insisted that judging by the spectacular patriotic role of Ndigbo to ensure Nigeria’s unity and survival,
the consistent perception that the Igbos are separatists and
secessionist agitators was a historical fallacy.

“Also another misconception of Ndigbo is that Igbos cannot speak with
one voice, ironically that is another fallacy, there are more things that
unite Ndigbo than divide them. But the Igbo spirit defies conditions
that are obstacles for the expression of their individual or group
opinion. This sense of egalitarianism is what defines the Igbo system
of governance based on liberal democracy and social justice”.

He listed the challenges and demands of Ndigbo from the Buhari administration to include; security, establishment of zonal and state police apparatus in the zone to support the federal federal security architecture, release of Igbo
youths detained by various security agencies across the country, improvement in federal infrastructures in the zone, such as; Roads, bridges and railways

“In conclusion, Mr. President, nothing is more important to the Igbos
in Nigeria today, than the restoration of serious sense of
belonging and the spirit of Nigeria’s founding fathers which is based on one
nation, one destiny. We believe this is possible through
Devolution of Power, ensuring a sense of balance in our political
system”

2 die as vehicle plunges into ditch in Anambra

2 die as vehicle plunges into ditch in Anambra