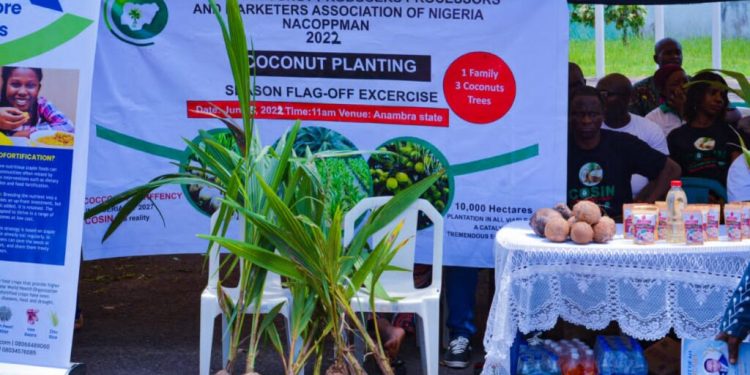 The Anambra state government led by the Executive Governor of Anambra State, Prof. Charles Chukwuma Soludo on Wednesday launched a regenerative agricultural policy and oil palm revolution of his administration geared towards the growth of the state’s agricultural economy and insurance of staple food sufficiency in the state. The governor introduced the novel agricultural policy at the events of the ceremony marking the flag-off of the 2022 Farming Season in Anambra State, with the theme “Empowering Women and Youth Through Regenerative Agriculture for Sustainable Development’, held at Dr Alex Ekwueme Square in Awka.

According to the Governor, the old Eastern Nigeria was developed and built from the proceeds of the region’s agricultural economy, particularly the oil palm economy, which was hitherto abandoned when crude oil was discovered in the nation.

He maintained that his vision in the introduction of the regenerative agricultural policy in the state is to position the state to earn foreign exchange through the exportation of the palm and coconut produce to other countries in near future.

The state Commissioner for Agriculture, Dr Foster Ihejiofor, dwelled on the governor’s blueprint and commitment to agricultural revolution in the state, as well as the general well-being of Ndi Anambra.

The Honourable commissioner stressed that to drive home the new agricultural policy, the state ministry of agriculture has inaugurated a “SAT Team, (Sustainable Agriculture Task Team) to map out and domesticate best indigenous farming practices for Ndi Anambra, particularly the farmers, stressing that the implementation of the policy will reduce the cost of farm inputs to the barest minimum, which will invariably ensure the reduction of the cost of staple food items in the state.

He maintained that his ministry will work with Anambra farmers, to drive home the governor’s vision in the new regenerative agricultural policy.