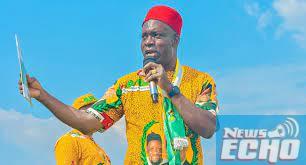 The Managing Director/Chief Executive Officer of Anambra Broadcasting Service (ABS), Dr. Uche Nworah has said that the winner of the just concluded November 6 governorship election in Anambra State, Professor Charles Chukwuma Soludo was voted massively by the electorate for him to replicate his successes at the Central Bank of Nigeria (CBN) when sworn in by March 2022.

He said that Soludo’s victory was a mandate given by God to attract foreign investors to develop not only Anambra, but the entire Igbo Nation.

Nworah, who spoke to Journalists at his office, in Awka, on Tuesday, while commending Ndi-Anambra on the peaceful electoral process, added that the 61-year-old economists was also voted into power by the people because, they hope and believe that he will perform optimally.

He noted that the governor-elect, Prof. Soludo and his deputy, Dr. Onyekachukwu Ibezim, are billed by APGA family, to govern the state for eight years.

Soludo won the governorship election with 112,229 votes to defeat the candidate of the People Democratic Party (PDP), Mr. Valentine Ozigbo, who came second with 53,807 votes and Senator Andy Uba, of All Progressives Congress (APC), who polled 43,285 votes while Senator Ifeanyi Ubah of the Young Progressive Party (YPP), came fourth with 21, 261 votes.

While congratulating him, the APGA chieftain, said, “this is a victory for democracy, not only for APGA but for all Nigerians because INEC has set a pace for the forthcoming Ekiti 2022 governorship election.

He explained that the BVAS despite initial hiccups was able to deliver a free and transparent election. “We are a nation that is on the move to greatness. So, we keep experimenting. The BVAS experiment was worth the while and we are very happy and satisfactory that our efforts paid off eventually.” he said.

Checking the obstruction of articulated vehicles on roads

Checking the obstruction of articulated vehicles on roads