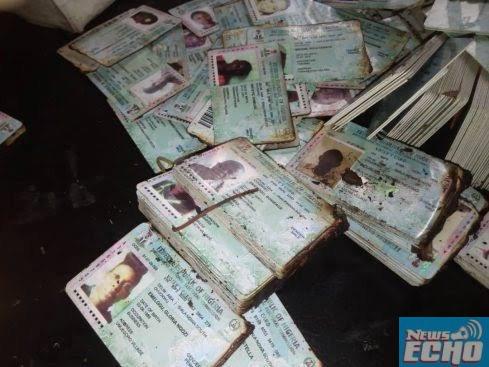 In a trendy viral video, a man was heard lamenting in the background how many people were disenfranchised by the wicked act.
“Yet INEC will be calling on people to go out and register, only for them to keep the cards from the owners by depriving them of their voting rights. What a wicked country,” he said.

“INEC could actually send the PVCs to several wards to help lessen the stress of millions struggling to collect the PVCs at the various INEC offices.

The video as shown casts aspersions on the veracity of INEC in the adequate distribution of the PVCs. A man who shared the video on his Instagram page alleged it is a ploy by politicians to disenfranchise many residents of the Southeast.

The PVCs were reportedly dug out from the ground. According to the man making the report, there are over 2 million PVCs buried underground to stop people from the South-East to vote in the last election.
Reactions have since trailed the report on social media, as many asked if this could be the reason why southeast voter strength is low.

How strike paralyses flow of academics