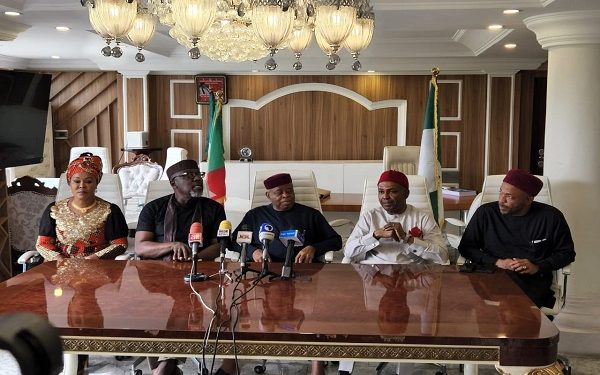 He won the election by beating the likes of Vice President Yemi Osinbajo, former Minister of Transportation, Rotimi Amaechi, and the Senate President, Ahmad Lawan among others.

More than 2,300 delegates voted in the contest that produced Tinubu as the presidential flagbearer of the ruling party.

He is now scheduled to face the Peoples Democratic Party’s Atiku Abubakar, Labour Party’s Peter Obi, NNPP’s Kwakwanso and a few others in the February 25 presidential ballot.

After weeks of political drama and intrigues during which the APC held several meetings and tried but failed to generate a consensus candidate, things started to swing towards Tinubu’s way.
However, when aspirants were called to address delegates before voting began, Former Minister of Niger Delta Affairs, Godswill Akpabio, was the first aspirant to step up. Rather than solicit votes for himself, he endorsed Tinubu and appealed to delegates to vote for the APC chieftain.

The only other endorsement from an aspirant came from Nicholas Felix to Vice President Yemi Osinbajo. Although 23 aspirants were billed to participate in the primary, nine of them including the seven aspirants who endorsed Tinubu and Felix who stepped down for Osinbajo pulled out of the contest.

The ninth aspirant who announced his withdrawal was former Senate President Ken Nnamani who decried the failure of the party to zone its ticket to the South East.

Thereafter, 14 aspirants went into the contest as voting commenced in earnest. They include Tinubu, Osinbajo, Amaechi, Lawan, Umahi, and Rochas Okorocha.

But, very surprisingly, Ebonyi State had 39 delegates in the APC presidential primary election and out of that figure, Engr David Umahi got 38 votes; Dr Ogbonnaya Onu got 1 vote making it 39. Imo had about 81 delegates and Rochas Okorocha got zero. Emeka Nwajiuba, even though absent, got only 1 vote. Where then, did Imo votes go? Probably, they simply voted for Tinubu of the Yoruba extraction or Lawan, suspected to be Gov. Hope Uzodinma’s interest, whom he allegedly expected will use him as deputy, where the consensus, they labored for goes through.

A southeastern patriot, who reacted to this development decried a situation where the easterners will tomorrow, begin to chant the song of marginalisation when it’s clear that apart from Ebonyi State, other South East States are a sellout in the struggle to have South Eastern persons grabbing presidential tickets of major political parties in Nigeria. This they also showed in the presidential primary of the PDP. Only Ebonyi State delegates voted a South Easterner, Sen. Anyim Pius Anyim. Igbos are the ones marginalising themselves, the respondent maintained.

Also, a former governor of Kano State and PDP stalwart in Kano, Senator Rabiu Musa Kwankwaso, has emerged presidential candidate of the New Nigeria Peoples Party (NNPP) at the party’s presidential primary held on Wednesday.
He was elected without any challenger having been the only aspirant that bought the presidential nomination forms after he was screened at the Moshood Abiola Stadium Abuja
Kwankwaso in his remarks expressed appreciation to all those who dropped their presidential aspirations for him and the delegates that elected him. Kwankwaso said that he would do whatever mattered to ensure the success of NNPP and its candidates for various elective positions in the 2023 general elections.

It could also be recalled that Nigeria’s former Vice President, Atiku Abubakar, emerged the presidential candidate of the Peoples Democratic Party (PDP).

Abubakar defeated 12 other candidates in a keenly contested presidential primary held at the Moshood Abiola Stadium in Abuja on Saturday.

Of the 767 accredited ballots at the election, he polled 371 votes while his closest challenger, Governor of Rivers State, Nyesom Wike, came second with 237 votes.

The only female in the race, Oliver Diana, and another contestant, Sam Ohuabunwa, scored one vote each.
A former President of the Senate, Anyim Pius Anyim, scored 14 votes while Bauchi State governor, Bala Mohammed, scored 20 votes.

While Atiku’s victory at the primary is his second successive attempt, it also marked his fifth shot at the presidency. He has had other unsuccessful contests for the seat under both the All Progressives Congress (APC) and his current party, the PDP.

The Adamawa-born politician also secured the ticket of the PDP in 2019 but lost at the general elections to the incumbent, President Muhammadu Buhari of the APC.
The former vice-president will again face whoever emerges from the forthcoming presidential primaries of the APC.