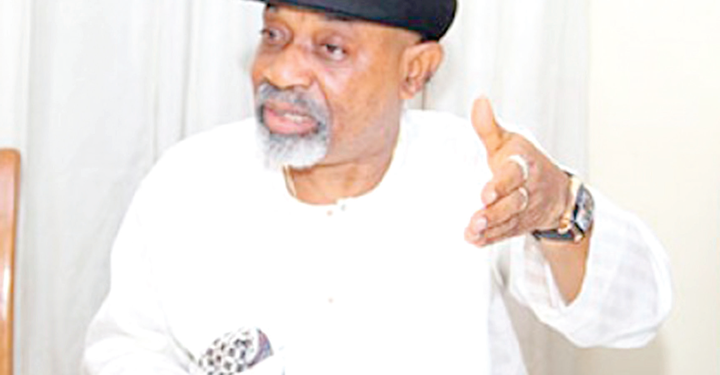 The Minister of Labour and Employment, Senator Chris Ngige has said that the All Progressives Congress (APC) would do whatever it would take to install a new governor in the November 2021 governorship election scheduled to hold in Anambra State on November 6, 2021.
The former governor of Anambra State who said this last weekend during an interactive session between the party stakeholders and members of the registration and revalidation committee in Awka, the state capital, stated that successive All Progressive Grand Alliance (APGA) administration in the state had failed to provide good governance for the people.

Ngige affirmed that “quality leadership” ended in 2006 when he left office, and also added that APC will install a governor who will continue from where he stopped.
He said; “Whatever it will take to achieve it, we will do it, to make sure we flush-out that non-performing government and take over. When I was governor, we built roads and other infrastructure that have lasted till date. Successive APGA governments failed to provide road infrastructure that was able to endure for more than six months before being washed away.

“They find it difficult to implement the minimum wage for workers, which many states have implemented. What they do at the government house is to cross their legs and make merry. The party has failed woefully in all spheres of governance. Therefore, by November, APC will install a governor, who will continue from where I stopped”.

Certainly, Ngige must have committed what Political Scientists call Freudian slip or parapraxis. In other words, Ngige, more than in a subtle manner, had practically revealed the intention of the APC as a ruling party at the centre to take over Anambra State. Therefore, what are the reasons that may have compelled APC into thinking and plotting the takeover of the state?

First, the Imo State governor, Senator Hope Uzodimma had made it clear during an APC South East leaders meeting that Ndigbo would muster more than 75 per cent for APC in subsequent elections. In fact, he made it clear that “Anambra was very dear to APC” that the party could not afford to slip in the November 6, 2021 governorship election. In other words, Ngige, Uzodimma and other leaders of the broom party in the South East might have resolved to make the zone an APC region starting with the Anambra election.

A second factor is, regarding of the fact that President Muhammadu Buhari had stated in 2015 after his inauguration that he “would give 97 per cent consideration to areas that voted for me and five percent attention to zones that never voted for me”, Ngige now sees the uttermost importance why Ndigbo should vote for APC beginning with the Anambra election in November this year. This is so because after the Anambra election, Buhari still have about two more years in office. So, in the analysis of Ngige, if Anambra votes an APC candidate as the governor in November, and with Imo and Ebonyi states already in the colours of the broom party, it can no longer be said that South East gave APC or Buhari only five percent and in view of that, the party may then negotiate on how to de-marginalize the South East.

Meanwhile, most PDP members and human rights activists are interpreting Ngige’s boast differently. According to Chief Osondu Nwachukwu, a PDP chieftain from Umuhu Ward in Aboh Mbaise LGA of Imo State, Ngige’s boast is just the opposite of what he meant. He said, “The fact remains that Ngige clearly knows and understands there is no way APC can win the governorship election in Anambra either in November 2021 or any other time. Look at it this way, Ngige himself has contested election on the platform of APC in Anambra, did he win? He failed and was made a minister. May be he wants to contest again. We are not against it. Again, which governorship election has APC won in Anambra? None! Let me tell you, if a credible, fair and free governorship election is contested in any state in the South East, including Anambra, PDP, not APC will win. South East is more than 85 per cent PDP. The two APC governors in the state never emerged from the ballot. Ngige has another thing in mind and said another thing”.
In his contribution, Njoku Okemadu, a human rights activist in Onitsha, Anmabra State said “I am not a member of any political party. I have heard what Ngige said about APC taking over Anambra in November 2021. May be there is a magic he wants to produce other than what we know the APC of. I am aware that Anambra is a PDP and APGA state. However, these two parties must not take such a boast for granted”.

Family Circle: Carry your cross and wear your crown