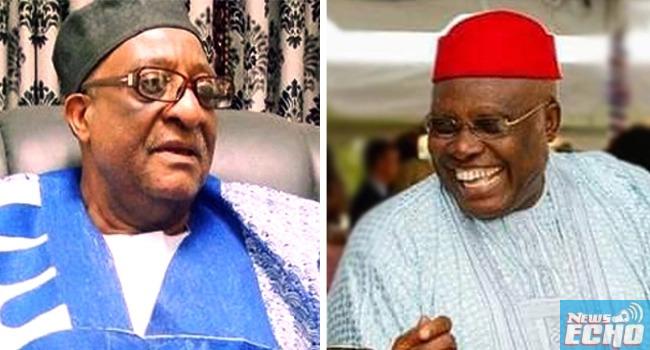 …As Rivers Gov. Wike poised for showdown
…Accuses Ayu of “ingratitude” and “arrogance”
Peoples Democratic Party Board of Trustees Chairman, Walid Jibrin, has resigned, according to reports: In the words of Jibrin;
“I am stepping down as the chairman of BoT.

I am stepping down to make it easier for all of us,” he said at a BoT and National Executive Committee meeting on Thursday in Abuja.
Former President of the Senate of Nigeria, Adolphus Wabara (from Abia State), has since been appointed as the new BoT chairman.

Jibrin’s resignation occurred amid agitation by the southern caucus of the PDP for the party’s national chairman, Iyorchia Ayu, to step down for a southerner.

Governor Nyesom Wike of Rivers State and a former PDP Deputy National Chairman, Bode George, amongst other southern members of the main opposition party had consistently demanded Ayu’s resignation but the former senator maintained that he won’t resign.

Earlier, Jibrin had said it is unfair that PDP produced presidential candidate in the person of Atiku Abubakar (Adamawa State), and Ayu (Benue State) both from the north.

The Nasarawa-born chieftain had said he was willing to sacrifice his office for peace to reign in the party.

It could be recalled that Rivers State Governor, Nyesom Wike, recently slammed the National Chairman of the Peoples Democratic Party (PDP), Iyorchia Ayu, for showing “ingratitude” and “arrogance” after he was assisted to get the seat of the national chairmanship of the party.

“These children you said we are, brought you from nothing,” the governor said during the commissioning of Omerelu Internal roads in the Ikwerre Local Government Area of the state.

Wike challenged Ayu to show himself as a man of honour and integrity by fulfilling his promise that he would vacate the chairmanship seat if the northern region produces the presidential candidate of the party.

The party’s strongman said, “Somebody said those of you who said the right thing must be done are boys; they are children. You can imagine what power can do. You can imagine how the ingratitude; how people can be ingrates.

“Ayu, you were impeached as Senate President, Ayu you were sacked by (former President Olusegun) Obasanjo in his administration two times. Arrogance cannot take you anywhere.”

He also said the N14bn PDP realised from the sale of forms for the party’s primaries last May must be judiciously used.

His comment is the latest in the calls for Ayu to quit the party’s chairmanship after former Vice President Atiku Abubakar (from Adamawa State) emerged as the presidential candidate of the PDP in May.

Ayu, who hails from Benue State in northern Nigeria, had in October said he would vacate the chairmanship seat if the region produces the PDP presidential candidate. But on Wednesday, he said he won’t resign.

Earlier, the PDP Board of Trustees (BoT) Chairman, Walid Jibrin, and a northerner from Nasarawa State agreed that it is unfair for the party to have its presidential candidate and national chairman from the same region.

Back to the history. the Peoples Democratic Party (PDP) National Chairman, Iyorchia Ayu, had earlier affirmed that he will not succumb to calls from some quarters for him to resign his position.

Ayu stressed that such calls are coming from political amateurs who lack a basic understanding of PDP’s principles. The former senator asserted that he was elected by Nigerians and members of the opposition party to that exalted position based on PDP’s guidelines.

According to reports, after losing the PDP presidential primary to former Vice Presidential Atiku Abubakar (from Adamawa State); Rivers State Governor, Nyesom Wike, outlined conditions for remaining within the party.

One of the reported conditions is that Ayu, who hails from Benue State, also in northern Nigeria, must resign.

But in his response, Ayu stressed that he will not resign because some people are not comfortable with having him around.

“I was voted as PDP national chairman to serve for four years, I am not even a year old on the position,” the former lawmaker said during an interview with BBC Hausa.

“Atiku’s victory at the national primaries has no nothing to do with the party’s leadership; I was the bonafide winner of the election. We acted within the dictates of the PDP constitution.

“I have not violated any rules; in fact, I am working to bring reforms to the party. I am truly not bothered by the unnecessary controversy being generated,” Ayu maintained.

Time for Christians to take over Nigeria’s leadership – HELBIN President