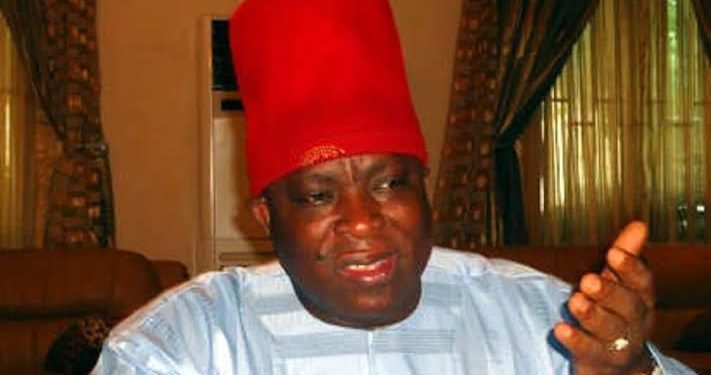 …Says Labour Party will replace Doyin Okukpe with a Northerner

The Senatorial Candidate of Labour Party (LP) for Anambra Central, Victor Umeh, has stated that his presence at the Senate chambers will produce fact finding solutions that will address the challenges facing the people of the zone.

Sen Umeh disclosed this while addressing a press conference at Nigeria Union of Journalists (NUJ) Complex in Awka, Anambra State, on Tuesday.

He noted that his if elected as a Senator he will bring hope, good governance, vision, ideas and programmes needed to to address the challenges facing Anambra north including Nigeria as a whole.

“I accepted to join Labour Party because it was a historic opportunity to reconcile with my brother and my people urged me to join the senatorial race with a view to continue speaking for the voiceless in the society.

“I brought APGA to Anambra in 2001; it was a struggle to get it rooted in Anambra State, but at the end, we brought it out from the bad side of history to the good side. People who believed that what we did could not be done got jealous. Those who were not part of the struggle came in and sowed seed of discord between me and Peter Obi.

“I’m a man of uncommon things, a good Christian. Politics does not make me not to take control of myself. My engagement with APGA was to ensure that this part of the country was not taken for granted. My leaving APGA was a shock to some people but some things are inevitable. I lost APGA ticket because some people were on vengeance mission.

“The country needs someone that will put Nigeria on reverse. What is very scarce in Nigeria is truth, because of social media.”

Responding to a question on Obi’s running mate, Umeh explained that the current presidential running mate of the party, Dr Doyin Okukpe, would be replaced in due course and legitimately, noting that “discussions are on to get someone that has vision, agenda and political clout to develop Nigeria too.”

He added: “All we want is what will make Nigeria work. LP will choose Vice Presidential Candidate from the North.

“The 2023 general elections will not be business as usual. Nigerians will surely elect best candidates from the State to the National Assembly. Labour Party is well positioned to give Nigerians people with visions to move the country forward.

“We have the best candidates. We believe on restructuring to make all the parts of the country productive.”

Uzodimma describes new Owerri Archbishop as round peg in round hole

Uzodimma describes new Owerri Archbishop as round peg in round hole