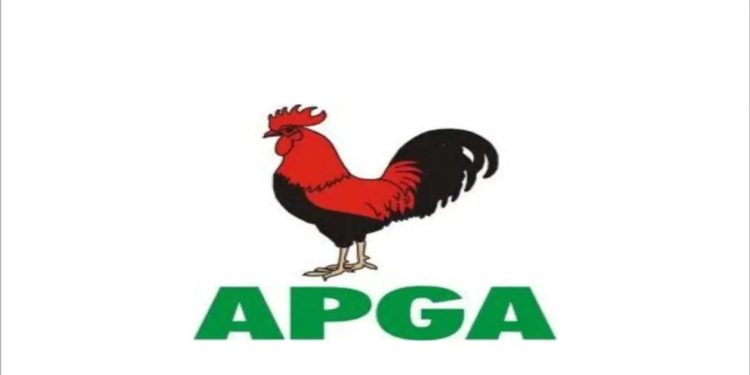 As the nation celebrates its 62nd Independence Anniversary, All progressive Grand Alliance (APGA) party in Imo state has expressed concern over the growing economic and security challenges been experienced in Imo state.

The party made it known on its Independence Anniversary message to the state. It disclosed that despite the efforts of the nation’s founding fathers and heroes much seems to be amiss as the nation and the state is battling kidnapping, banditry, Unknown gunmen attacks and all forms of criminality.
Speaking to Newsmen, the state party chairman, Hon John Iwuala disclosed that lots of political and economic activities have been grounded in some parts of the state because of the activities of the unknown gunmen.

He disclosed that people living in Orlu, Okigwe and Owerri zones of the state are afraid to go about their normal business due the insecurity challenges thereby effecting the economy of the state as prices of goods and services are hiked on daily basis.

The party disclosed that the governor of the state Senator Hope Uzodinma, “seems hopeless on how to tackle these security and economic challenges confronting the state”.

However, APGA urged the state not to be despaired as definitely there must be light at the end of every tunnel
“Let us keep faith alive by supporting APGA candidates in the forthcoming general election early next year. They will guarantee us democracy dividends.
“Let us help to drive away the APC and their affliction so that affliction will not rise against us again”.

The state Chairman, Hon John Iwuala with the State Publicity Secretary, Hon Emeka Nkwoada called on every political leaders who is supposedly sponsoring insecurity in the state to desist from such evil acts as the blood of the innocent Imolites killed in this manner is a crime against God and humanity and anyone find culpable will receive the repercussions.

The party further called on the opposition to come with their constructive criticism instead of making the state ungovernable for the present government in the name of fighting the Governor, not knowing they are fighting innocent Imolites, as it will definitely set back the improved road constructions currently going on in few areas in the state thereby giving the present government a room for excuse.

The party threatened to invoke the spirit of late Ikemba Ojukwu and all other ancestors of Igbo land on anyone found sponsoring insecurity in the land.
The party further called on the state government to make public the names of those sponsoring insecurity, banditary terrorism and other criminally related activities in the state as earlier promised by the state Governor, His Excellency, Distinguished Senator Hope Uzodinma.