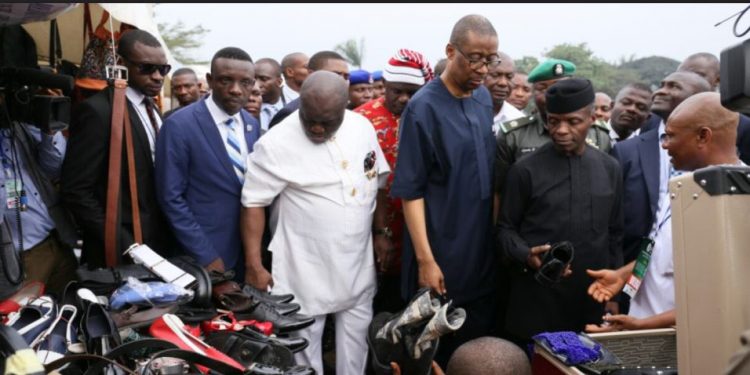 The election of Governor Okezie Ikpeazu in 2015 as the helmsman of Abia State opened a new page in the history of the God’s Own State. It was a year a new man of power emerged to lead the state; from a unique background: academia.

Addressed as Dr. Victor Chibuikem Okezie Ikpeazu, on assumption of office hoisted his banner of a five-point agenda in education, agriculture, commerce, industry and oil/gas, which according to his design, would strategically position the state among the best developed centres of the country. The points presented Ikpeazu as a man who had come to work for the people.

In this report, Dan Maduagwu ex-rays the impacts of the governor’s administration on the populace and what to expect in the next three years.

Emerging from years of modest development by the two Orjis, Kalu and Theodore, now in the Senate of the Federal Republic of Nigeria, Abia’s date under Governor Okezie Ikpeazu can best be said to have enjoyed a mixed grill of ups in many areas while suffering lows in other angles.

The governor, without doubt, has been in the crusade of promoting made-in-Aba products, an effort never taken this far by any ruler of the state, since it was created in 1991.

Ikpeazu also strongly believes that Aba, the Enyimba City should be a microcosm of Lagos, where all Igbo entrepreneurs and of course, investors drawn from across the nation would come to do business. This marketing stride, coupled with his Enyimba Economic City plans have earned him several recognitions from some reputable media houses as well as some federal government trade promotion agencies.

The Enyimba Economic City, when completed, has the capacity to create thousands of jobs. This is the essence of Aba being the commercial nerve centre of the east.

This is not forgetting the recent installation of Aba automated shoe industry, which would activate the ingenuity of young artisans whose pace of production was hitherto hampered by poor operational equipment. According to Emeka Ogbonna, an Aba-based shoe maker, “In the area of providing empowerment to us, the governor is doing enough.”

On roads, the governor has taken great steps in tackling some bad roads in the state, especially those in Aba, commercial hub of the state.

“Governor Ikpeazu has really constructed several kilometres of road across the state, particularly in Aba. If you consider the lean resources of the state, you simply will give him a pass mark”, Uche Nwamkpa said.

Increase in the monthly Internally Generated Revenues (IGR) of the state from N650m monthly to N1b, as confirmed by Dr Aham Uko, Commissioner of Finance, is a milestone for the administration, which meant that it has been armed with the financial wherewithal to deliver quality projects to the citizenry. In other words, the governor has been able to create more financial strength for the state via IGR increase!

In agriculture, the governor has done excellently well, building many rice mills in different parts of the state like Isukwuato, Bende, Uzuakoli, etc to end Abians’ dependence on imported rice.

Speaking on this, Elder Onyebuchi Ucheako, a farmer said, “The fact remains that Ikpeazu has done great in agriculture by making the God’s Own State a rice producer. This has made abia’s food production to skyrocket and equally created employment and agricultural industrialization.” He has also empowered oil palm farmers with the injection of 4million Tenera palm seedlings. 165,000- Capacity bird poultry has been inaugurated at Nsulu, Isiala Ngwa North LGA while more of them are being built in other zones of the State. The distribution of fertilizers and other farm implements are also another great step by the governor, which in return would make the State less dependent on other states for food.

In the area of sports, Ikpeazu has also maintained the Enyimba football club’s track record of giant strides. The Aba-based team lifted a couple of trophies, including the Nigerian Professional Football League and Federation cup titles. This act has actually placed Abia in the frontline of sports in Nigeria.

It’s also to the credit of Ikpeazu’s administration that the state has been very peaceful and united. There are no skirmishes or deep crises in Abia compared to other neighbouring states in the South East.

LOW POINTS
The slowness of the governor’s administration in completing the Osisioma Flyover is one of the low points recorded by the Obingwa-born helmsman.

Being a signature project by the governor, which he initiated during his first term in office, many Abians are of the opinion that the flyover should have long been completed and commissioned as completing it would not only add to the infrastructural growth of Aba, but also contribute to his industrialization agenda while also enhancing his ratings. This will also deprive the opposition leaders in the state a major campaign points against his government.

Poor environmental challenges of Aba are another area the administration should improve on.

This is because one of the major challenges facing the Enyimba City is the eye-popping heap of refuse in the streets of the commercial centre, especially as witnessed along Port Harcourt road. These heaps are causing serious negativity to the state in the eyes of first-time visitors.

Poor drainage system on the major and inland roads in Aba is another nightmare of Enyimba city’s residents. It is a usual occurrence to see residential homes and shops submerged any time there is a heavy downpour, a situation that impacts negatively on the growth of commercial activities during season.

Though, the residents are partly to blame for this predicament, as they are in the habit of filling their gutters with solid wastes.

In Umuahia, the capital city, it is still believed by some critics that the old city which produced the like of Dr Michael Okpara, former premier of the old Eastern Region, Dr J.O.J. Okezie and a host of others, is yet to reckon with other state capitals. The capital, according to the critics, is lacking in infrastructural development, a claim vehemently denied by the state government. For instance, former Imo state governor, Owelle Rochas Okorocha scored high points when he initiated what he called Urban Renewal Programme which saw him constructing about 10 new roads in Owerri and also expanded major roads in the capital city. However, Ikpeazu, in his five years, has yet to carry out such programme.

In education, the State has done well by regularly producing the best candidates in WAEC and JAMB examinations, though such feat, according to some opposition party members, should not be celebrated because the candidates who distinguished themselves in the exams were students of private-owned schools, not from the public schools funded by the government. The backlog of salaries owed the staff of Abia State Polytechnic, Aba, Abia State College of Education Technical, Arochukwu, coupled with the issue of overcrowded staff strength, are a drawback to the Ikpeazu’s dream of placing the education industry on the threshold of excellence.

In the oil and gas sector, the governor has initiated several commendable policies aimed at transforming the oil-producing areas.

Anchored around the Abia State Oil Producing Areas Development Commission, (ASOPADEC), the governor made it clear that the the communities which lay the golden egg would not be abandoned.

However, these promises have not translated to the desired results yet, as the problems of pollution and poor road network still militate against the rural dwellers.

RENEWED EXPECTATIONS
In a nutshell, Okezie Ikpeazu has performed well in agriculture, commerce, promotion of Abia goods and has also managed the political stability of the State better than seen in many South-east states.

He has also done modestly well in revival of some moribund companies.

Many roads have been built, especially in Aba, while many others like the Bende– Itumbuzor -Ntalakwu road in Bende LGA remain death traps. Port Harcourt road which connects four LGAs of Osisioma, Aba North, Aba South and Ugwunagbo still beg for redemption.

Thirty-two months are still enough for the PDP Governor to consolidate on all giant projects his administration has started.

The period in preview is also adequate for him to correct all mistakes made, in order to build a lasting legacy for himself and the state.

He still retains the opportunity to write his name in gold, and change the Abia story forever.