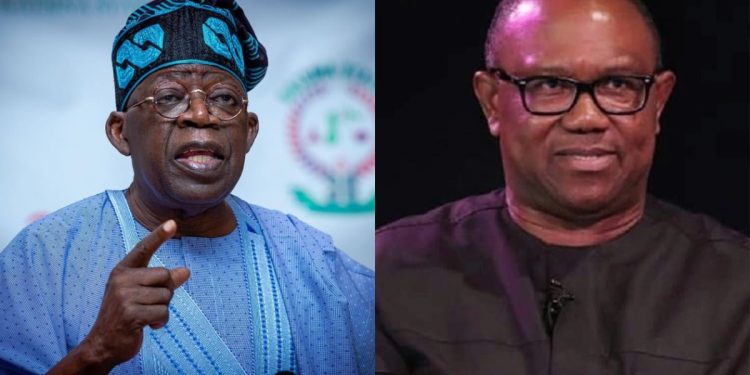 ….Political pranks, we’re not looking for money, only attracting investment – LP
….Afenifere divided over Tinubu/Obi
….. I like what Peter obi is doing – Umahi makes U-turn

The Labour Party’s Peter Obi has been requested to be disqualified from the 2023 presidential election by a group operating under the Tinubu-Shettima Connect banner.

According to reports, the group was responding to news that Julius Abure, the National Chairman of the Labour Party, had established an 11-member Diaspora Committee to coordinate fundraising events among other things. The swearing-in took place a day after parties supporting the party in the diaspora promised to raise $150 million for Obi, and another N100 billion will come from supporters in Nigeria.

The organization requested that the Independent National Electoral Commission (INEC) disqualify Obi and his running companion, Ahmed Baba Datti, for violating the election laws on funding campaigns in a statement released on Saturday and signed by its chairman, Adebanjo Moyosore.

In addition, the organization has pledged to file a lawsuit to stop the Labour Party from running in the 2023 presidential election due to its participation in acts that are illegal under the Electoral Act.

The Tinubu group asserted that it was unlawful to solicit contributions for political campaigns from outside the country through unidentifiable individuals or organizations and added that doing so would have negative effects.
It claimed that the Labour Party’s leadership had established a diaspora committee to raise money from Nigerians living abroad for Obi’s presidential campaign, which was not only “illegal but also criminal.”

“Section 85 of the Electoral Act has clearly explained this; Section 85 (a) (b) provides that any political party that: (a) holds or possesses any fund outside Nigeria in contravention of section 225 (3) (a) of the constitution, commits an offence and shall, on conviction, forfeit the funds or assets purchased with such funds to the commission, and in addition, may be liable to a fine of at least N5million, or (b) retain any fund or other asset remitted to it from outside Nigeria in contravention of section 225,” part of the statement reads.

Labour Party reveals why Peter Obi is meeting with Nigerians in diaspora
The Labour Party (LP) has refuted rumors that Peter Obi, a contender for president, was looking for foreign finance for his campaigns.

Several Nigerians have criticized Peter Obi for visiting other nations to meet Nigerians living abroad and for the LP’s creation of a contentious committee.

Abayomi Oluwafemi, the national publicity secretary of the Labour Party, clarified the situation in a phone interview with Newsmen on Saturday. She referred to the claims that the party was also looking for foreign funding for its operations as part of the pranks of political rivals who were scared off by the party’s rising profile and its presidential candidate.

Oluwafemi said: “It is ridiculous that our political opponents have descended to a new low to insinuate that our party is oblivious of electoral laws.
“For the avoidance of doubt, neither our party nor our candidate is seeking for foreign funding for any of our activities. “Our candidate, Peter Obi, is hitting the ground running.

“He is reaching out to Nigerians in the diaspora most of whom have lost confidence in the current administration and see no reason to come home to invest. “He is getting them ready to have a rethink because the incoming Labour Party-led administration which by the grace of God, he and Datti will be leading, will provide an enabling environment for direct foreign investment required to revive our ailing economy which the APC has unfortunately destroyed.” He also denied rumors that the party leadership and the presidential candidate were at odds over campaign financing.

He claimed that the party had since disproved the rumors that it claimed were a part of a coordinated scheme by political rivals to reduce the party’s expanding power.

I like what Peter obi is doing – Umahi
Ebonyi State Governor, David Umahi, on Friday, swiftly made a U-turn on his earlier stance on the presidential candidate of the Labour Party, Peter Obi.
This was as Umahi said he would stage an attention-grabbing reception for the former Governor of Anambra State, adding that “I like what Peter Obi is doing.”
Umahi stated this in a TV interview on Friday, and expressed his admiration for the activities of Obi as the 2023 general elections draw nearer.
Umahi further described Obi as a friend and debunked ever saying that Obi would not get any vote in the All Progressives Congress-controlled Ebonyi State. Umahi, “I never in all my outings and utterances mentioned Peter Obi. “Peter Obi is my friend, I’m going to host him in Ebonyi State and I will host him publicly, “I like what he’s doing, and it’s very encouraging.” Recall that Umahi was quoted in the past to have said Obi would not get any vote in the state. He denied making such comments and accused the Peoples Democratic Party, in his state, of masterminding such narratives.

2023: Afenifere Divided Over Tinubu/Obi
The Pan Yoruba Socio-Cultural Organization, Afenifere is divided on the presidential ambition of the flagbearer of the All Progressives Congress, Bola Tinubu and the presidential candidate of the Labour Party (LP), Peter Obi.
The leader of Afenifere, Ayo Adebanjo had openly supported their presidential ambition of Obi.
Adebanjo had claimed that it is the turn of the South-East to take over power, hence the reason for his support for the former Governor of Anambra State.
The immediate past National Secretary of the group, Basorun Sehinde Arogbofa, in an interview had said Adebanjo has the right to support anyone.
According to Arogbofa, if the election is held in 2023, the majority of Afenifere members will support Tinubu.
Arogbofa said Tinubu did well as Governor of Lagos State, adding that he can bring that on board as president.
He said, “Afenifere members are not robots. They are made up of intelligent people with strong convictions but occasional divergent views. That notwithstanding, they are bound together by the welfare philosophy of the association. On any contentious issue, they come together as democrats to discuss and agree on a consensus.
“While the consensus becomes their public stand view those who disagree are still allowed to keep their views without necessarily making them an opposition position to the majority decision. After all, when Afenifere floated the SDP for its members to contest upon, a few individuals were known to still hoist the Labour Party flag in their residence, while a few others were said to be secretly romancing with one party or the other. Yet, Afenifere did not break. Yes, Baba Adebanjo has been supporting a presidential candidate Mr Peter Obi, even when an Afenifere meeting for a consensus has not been held.