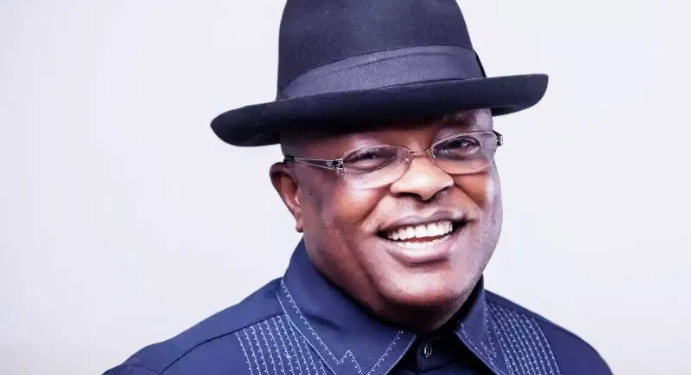 There were three prominent red caps dotting the hall, as the All Progressives Congress (APC) held its National Executive Committee (NEC) meeting on Tuesday, December 8 at the Council Chambers of the Presidential Villa, in Abuja.

The type of cap worn is often symbolic of the part of the country you hail from. Red is typical of the East, particularly if you are a title holder. And these three were no mean men.

Umahi has displayed courage
of conviction. He
said the South East has been let down by the
PDP in the last 21 years, so it was time to switch
camp. It takes the heart of a lion to change
course in such setting. Some people said it was
because he wants to run for president in 2023.
And why not? The party has not come out with
its zoning formula, but in a democracy, anyone
can aspire for any position, as long as he can
muster the needed support and momentum for
victory

The first red cap adorned the head of Chief Orji Uzor Kalu, a former two-term governor of Abia State, and an early comer to the APC from his region of the country. He caught the vision of a renascent Nigeria early enough. He used to belong to the Peoples Democratic Party (PDP) and the Progressive People’s Alliance (PPA).

The second red cap sat daintily on the head of Hope Uzodimma, another wise man from the East, and governor of Imo State. He also used to belong to PDP, till he had a Damascus road experience like the biblical Saul, who became Paul.

The third red cap? That was on the man of the moment, and star of the NEC meeting. Every mention of his name drew applause. Chief Dave Umahi, an engineer, and governor of Ebonyi State.

Umahi had been a PDP man, possibly all of his political career. He was deputy governor to Martin Elechi for eight years, succeeded him as governor, and is now in his second term.

Umahi had always loved and respected President Muhammadu Buhari, and never hid it, though they were of different political parties. And the resident reciprocated in like manner. In fact, the first State the president ever visited in the country, and passed the night, was Ebonyi. Umahi was PDP in the exterior, but APC at heart.

My first inkling of what was on the way was about two years ago. There was a meeting of Progressive Governors (as those elected on the platform of APC are called), and Governor Umahi had sent his deputy to attend. A PDP man among APC governors? Something was definitely cooking.

Now, the deed has been done. Governor Umahi has done what Napoleon couldn’t do. He has officially crossed from the PDP to APC. Only a man with the heart of a lion could do that.

Do you remember the 1978 reggae song by a musician called I-Roy? We were boys then, and we loved that music, a sort of DJ chant in Jamaican patois. You were young in the 70s, and didn’t know I-Roy? You sure missed an exciting part of early life.

The title of the album was Heart of a Lion. It was a star hit, and no party was complete without it. If you suffered from reggaemylitis (as I did then), I-Roy was a chart buster. The album featured other hit tracks like “Sister Nelly”, and “Casmas Town.”

What Umahi exhibited last month in crossing from PDP to APC can best be described as the heart of a lion. We know how the region he hails from has long been overtaken by the PDP, and with little to show for it. Their roads are dilapidated, bridges rickety, and in fact, the second bridge over the River Niger was built by mouth for the 16 years PDP held sway. Now, President Buhari is building the bridge, and is poised to complete it in 2022. Holy Moses!

Why did the South-East hold tenaciously to PDP, despite being given the shorter end of the stick? Nobody knows. Till people like Orji Uzor Kalu, Hope Uzodimma, and now, Dave Umahi, began to ask questions, and followed it with pragmatic action. That was how and why an APC NEC meeting was dotted by three prominent red caps. Wonders are part of the world, and they will never end.

See what the entrance of Umahi into APC has done for the party. When in year 2015, Hurricane Buhari blew in, the APC had 24 governors, PDP had 11, and All Progressives Grand Alliance (APGA) had one. But due to schisms and wrangling, APC states began to dwindle, till it was almost 18 to 17. Zamfara, Bauchi, Sokoto, Benue, Oyo, Edo, were all lost.

If Ondo had not been won by Arakunrin Rotimi Akeredolu a couple of months back, it would have been the nunc dimitis of APC. The party was fast vanishing, and the auguries for 2023 were not good.

Victory in Ondo was good. It took the tally to 19-16. Then came the game changer. Ebonyi came into the bag, and it became 20-15. Anambra still remains APGA. And APC that almost couldn’t breathe again had a huge relief.

If there was a time the APC needed a shot in the arm, it was the time Dave Umahi came. It changed the country’s political map and configuration. And APC is breathing easier again.

You then see why he was easily the star, the cynosure of all eyes at this week’s APC NEC meeting. When the Caretaker Committee chairman of the party, Governor Mai Mala Buni introduced him, there was rapturous applause. And when President Buhari equally mentioned his name in his speech, the hall exploded again.

Umahi has displayed courage of conviction. He said the South East has been let down by the PDP in the last 21 years, so it was time to switch camp.

It takes the heart of a lion to change course in such setting. Some people said it was because he wants to run for president in 2023. And why not? The party has not come out with its zoning formula, but in a democracy, anyone can aspire for any position, as long as he can muster the needed support and momentum for victory.

I’ve always said it. The South-East must play better politics to get the ultimate office in the country. Sleeping and facing the same direction may not be the best option. The Orji Kalus, Hope Uzodimmas, Chris Ngiges, Dave Umahis, and many others, are now shining the light, so that their people can find the way.