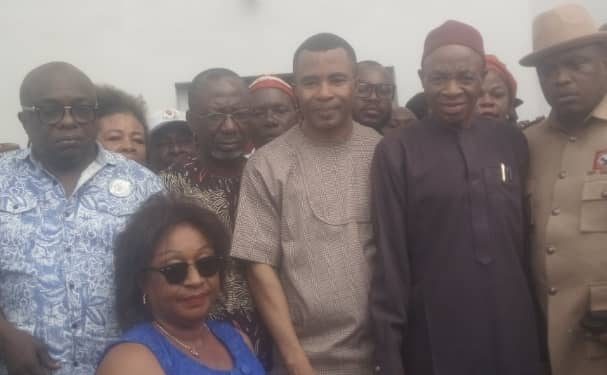 A catalyst for purposeful leadership, Sir Basil Maduka, has left the PDP for Labour Party where he made his interest to vie for Imo Douglas House Seat known to the people in the next election.

Addressing leaders and followers of Labour Party at the party’s secretariat Owerri last week, Maduka disclosed that he is in the race to be able to lift Imo people from poverty, hunger, hardship underdevelopment and insecurity, adding that he tested his political capacity and ingenuity by aspiring for Owerri Zone Senatorial Seat under the platform of PDP.

Reiterating his desire to create employment, install infrastructure such as portable water, hospital, electricity and good road to encourage productivity if he becomes governor, Maduka told the Labour Party to see him qualified and fit for the Seat and give him the ticket.

“I’m a village man who is well grass rooted. I know the problems of the people and I’m proud to have come from Imo State. I’m a crusader of good governance, good living and good environment”, the entrepreneur stated.

The philanthropist maintained that he wants to save the people from bad leadership and poverty, as well as create a favourable future for the born and unborn children of the state, saying he “will install good roads and other infrastructures to boost production: agriculture, commerce and industry, thereby advancing the economy and enhancing better living for our people. I’m presenting myself to Imo people. If you support me, give me your mandate I will revive and enhance the abandoned resources. I will bring in multinationals to invest to strengthen commerce and industry.

“I’m most concerned at liberating the people from poverty, hardship, insecurity, and you do not kill your people in the name of fighting insecurity that was created by bad governance and greed. I will make Imo more attractive and a haven of relaxation, economic prosperity and socially viable for all citizens and visitors”.

Calling on the people to fully support Peter Obi to be President of Nigeria, the Akpodim Ezinihitte Mbaise born technocrat, harped that the “era of money politics is over. Let all of us partner to elect Peter Obi to be President in 2023 to be able to save the future of our children born and unborn because when everybody is economically and positively engaged criminality will reduce minimally.”