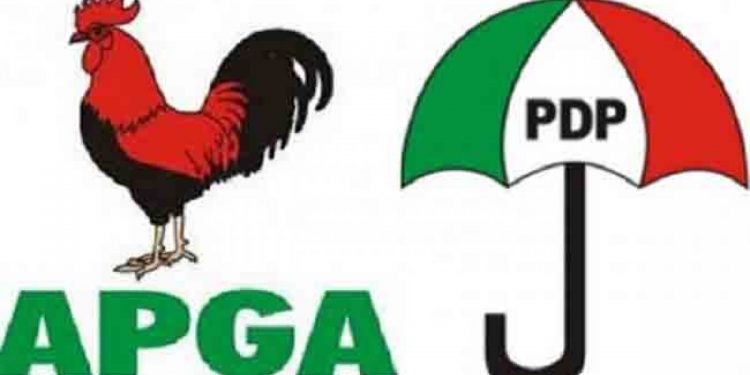 The All Progressive Grand Alliance (APGA)-run Anambra State Government and People’s Democratic Party (PDP) have urged the Independent National Electoral Commission (INEC) to disclose the details of its proposal to use the 2021 Anambra governorship election to test run electronic voting system in the country.

The position of the two parties came as the former President Goodluck Jonathan and Bayelsa Governor, Duoye Diri, have advocated e-voting as a means of checkmating electoral malpractice in the country.

Also All Progressive Congress (APC) and the Young Progressives Party, (YPP) have commended the electoral umpire initiative in introducing e-voting, which they said will improve elections and curb manipulations in the electoral system in the country.

INEC Chairman, Prof. Mahmoud Yakubu had disclosed that the Anambra election will be a test case for the introduction e-voting in the country.

Mahmoud had also disclosed that there were also plans to ensure Diaspora voting to enable more eligible Nigerian citizens working in diplomatic missions or those permanently living abroad to vote.

Speaking to News Echo in separate interviews, the State Commissioner for Information and Public Enlightenment Mr. C. Don Adinuba and the state chairman of the opposition Peoples Democratic Party (PDP), Chief Ndubuisi Nwobu said that they are yet get full details of the modalities for the e-voting.
Adinuba said the government needed the full information on the modalities for the e-voting and can only react when act when such details were available.

While welcoming the idea of e-voting, Nwobu said adequate information should be made available to the parties on how it was going to be organized.

He also said that before the e-voting commences, there is need for it to backed by law so that nobody will challenge the outcome of the election in the court on that basis.

“The INEC statements on using Anambra state 2021 governorship elections to test run the e-voting needs to be made clearer to us for us to know what are involved. We cannot officially react on issues when we don’t have details information” he said.

Also speaking on the issue, one of the governorship aspirants under platform of PDP in the state, Dr. Godwin Ezeemo also said that he cannot say anything on the e-voting until he get clearer picture of the modi operandi.

“Right now ,I cannot make any statement on it until I see the condition for the e-voting . I cannot not make comment on what I don’t know anything about. They said they want to use e-voting for the forthcoming governorship elections in Anambra state. I cannot say much until they come out with the details information” he said.

However, the chairman APC in Anambra state, Chief Basil Ejidike described it as a great milestone in the electoral reengineering of the nation’s electioneering process.

According to him, the e-voting allows free and credible elections that are devoid of manipulations and other vices associated with the country elections process over the years.

He said by introducing e-voting, the ruling party was interested in bequeathing a legacy of sanity in the electoral process in the country.

Ejidike said that the APC in Anambra is fully in support and is ready to work with the INEC to achieve successful election in the state.

“We are in support and fully prepared to work with INEC in the e-voting experiment. The e-voting will stop the unnecessary manipulations, rigging and others that were associated with our electoral process in the past.

It behoves on all of us to support and make sure that it works. We will do everything humanly possible to ensure that INEC succeed with the e-voting. It is not a new thing, it has been working in other climes and it will work in Nigeria” he said.
He however said that the system cannot be adopted without a legal framework, stressing that that INEC as a credible institution cannot do anything that is not backed by law.

“The fact that they said they want to test run e-voting in Anambra, means they will make sure that their actions are backed by law. E-voting is more transparent and credible. It is done in other places and it can be done in Nigeria. This simple means as you are voting, it is automatically being recorded and giving no rooms for rigging and manipulation of votes. It is highly welcome and I want to commend APC for the wonderful move” he said.

The 2019 Presidential candidate of the Young Progressives Party, YPP, Prof. Kingsley Moghalu welcomed the development. He urged the National Assembly to make necessary amendments to the Electoral Act in order to make the reforms possible.

Speaking on his Twitter handle, the former YPP presidential candidate, who hails from Anambra state said, “I’m very pleased that INEC has decided to introduce electronic voting and voting access for Nigerians in diaspora.

“Kudos to INEC Chairman Prof. Mahmoud Yakubu for these steps. We hope national assembly ill make the necessary amendments to the Electoral Act of 2010 to make these reforms possible. It’s great that the electoral commission intends to start as early as Q1 2021 with voter registration.”

“Surely time to make votes count and be counted transparently! That’s a core requirement of real democracy,” his tweet added.

Meanwhile former President Goodluck Jonathan and Bayelsa Governor Senator Douye Diri have advocated the use of electronic voting as a means of checking electoral malpractices in the country.
They lampooned politicians who promote thuggery and cultism as a means of winning elections in the country.

The two leaders who spoke at the Third Synod of the Diocese of Ogbia at St Mark’s Anglican Church, Otakeme, at the weekend, called for the immediate adoption of electronic voting system to curb the ugly trend.

Jonathan said, “Our political activities particularly the use of young people as militiamen and thugs and so on to win elections has increased the security challenges facing our nation.
“Some the youths they use are so protected that even the police cannot arrest them because they are ‘boys’ to powerful politicians who use them during elections.

On his part, Governor Diri who was represented at the occasion by his deputy, Senator Lawrence Ewhrudjakpo, urged youths to shun politicians who only use them as canon fodders to achieve their selfish political goals and abandon them afterwards.

He noted that, the only way a youth could resist the temptation of going into thuggery and cultism is to love and appreciate him or herself as a unique creation of God.

Governor Diri also used the opportunity to call on people of the state to key into the present administration’s prosperity agenda by embracing agriculture and small scale businesses to better their lot.
According to him, “Just like our father (the former President) said earlier, I want to encourage our youths to resist evil politicians who do not mean well for them. If they invite you to carry guns, ask them, where are your children? You must learn to love yourself above any politician.

“For us as a government, we are determined to improve the lives of our people. And our focus is to see how prosperity can be engendered. Prosperity is not engendered by coming to beg a politician to give you something to eat.

“The man who teaches you how to fish is better than the one who gives you fish. To be taking fish from a politician everyday is to be dependent. To be a fisherman is to be independent. And to be independent is the glory and desire of every reasonable man.
“So, we are ready to make our youths self-reliant and prosperous by teaching them how to fish in agriculture and other legitimate endeavours.”

Delivering his charge as President of the Synod and Bishop of Ogbia Diocese, Right Revd James Aye-Oruwori, cautioned the Federal Government not to use its Companies and other Allied Matters Act (CAMA) to undermine the sacred place of the church in society.

He said the theme of this year’s synod tagged ‘I Am That Am’ emphasizes the self existent nature of God who is in perfect control of all situations and circumstances.

Bishop Aye-Oruwori, who thanked the dignitaries and all synodees for attending the event, urged Christians not to presume to have known God enough but strive to serve Him in humility at all times.
The 3-day programme had in attendance the Bishop of Northern Izon Diocese, Right Revd Funkuro Amgbari, his Niger Delta West counterpart, Right Revd Emmanuel Oko-Jaja and the Bishop of the Diocese on the Lake, Imo State, Right Revd Chijioke Oti, in addition to several prominent personalities from within and outside the state.