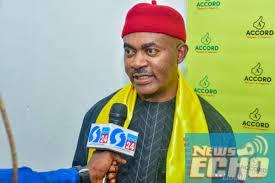 0
SHARES
173
VIEWS
Share on FacebookShare on TwitterShare on Linkedin

Accord Party governorship candidate in the last Anambra guber election, Dr. Godwin Maduka has called for the cancellation of result as it did not reflect the wishes of Ndi Anambra.

Maduka who made this known at his country home Umuchukwu, Orumba South L.G.A, said the voting processes was marred by irregularities arising from the electoral commission.

The medical expert also bemoaned the high level of disenfranchisement experienced from eligible voters especially the elderly who were also exposed to hunger as most of them waited in vain to get accredited.

According to him, “At this point I believe alot needed to be done. Most people didn’t vote, I can actually say close to 40 percent went home out of frustration without casting their vote”. The machines was faulty and the INEC staff arrived around 11am for an election that was supposed to start by 8am”.

“Especially those elderly men and women who were there for so long and could not vote, it took me up to two hours trying to get accredited and this has left uneasy tension among most of the voters including the aspirants and so I believe the election has to be redone”.

“This election was fraught with a lot of short-comings on the part of various government institutions. The security agencies failed to provide a peaceful environment for campaigns to hold. On election day, they were absent from many polling centres leading to elections not holding or held in situations that allowed for chaos and fraud”, he noted.

The Accord party flag-bearer however, called on INEC to make away with the B-VAS machine and go for the manual voting process, adding that there was no clear winner until the election is repeated.

“Alot of Ndi Anambra have been calling me asking me when to vote again and I say to them, be patient, INEC will have to re-do the election process, he added”.

Expressing the need for a total re-run of the Anambra election, Dr. Maduka said, “I was not the one that made the decision to cancel it, it was under the impression that Ihiala conducted no election and Orumba south result was not released on time.