Aforka asks APGA aspirants to step down for Soludo 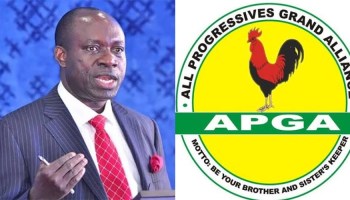 Aforka was speaking while addressing members of the party at his country home, Ndiowu, in Orumba North Local government area of the state, recently, when he hosted one of the leading gubernatorial aspirant under APGA, Professor Charles Chukwuma Soludo and his campaign team. He alleged that the 2019 election that produced Ezenwankwo who is also contesting the November 6th, governorship election under the party’s platform was a product of intimidation and harassment.

Aforka confidently told Prof. Soludo, his campaign team and other members of the party, who were present at event that without him and his boys Okwudili Ezenwankwo wouldn’t have won the National Assembly seat. “I am the one who brought him into APGA in 2015. I taught him politics of Orumba North/South. Work for him with my supporters to ensure he won the election. He was still a trader at Onitsha market when Mr. Peter Obi, first appointed me the Transition Committee Chairmen of Orumba North local government area in 2008”

Aforka who is also the Deputy Majority Leader in the State Assembly, revealed further that since Ezenwankwo was elected to represent Orumba people at the National Legislative House, he has not attracted any meaningful project to the area.

In his brief remarks, the Acting Chairman of APGA in Orumba North LGA, Pharmacist Alphonsus Muogbo assured Prof. Soludo that the party in Orumba North will ensure he emerged as the governorship candidate for APGA, come June 23. He urged other APGA aspirants to step down and queue behind Soludo’s candidacy.