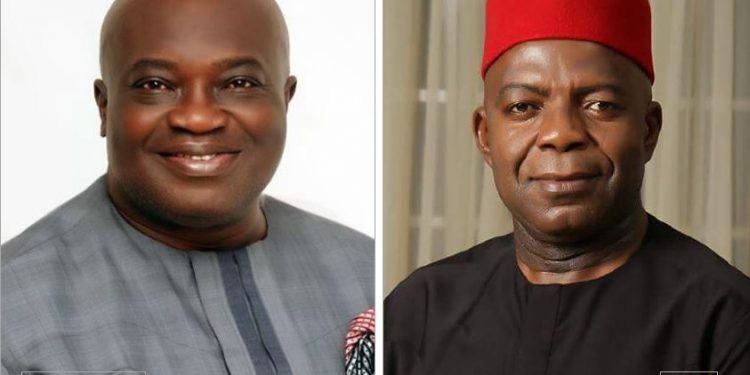 0
SHARES
67
VIEWS
Share on FacebookShare on TwitterShare on Linkedin

On Friday, August 14, 2020, Dr Alex Otti, the two-time governorship candidate of All Progressives Grand Alliance, APGA, joined the All Progressives Congress, APC, the political party that currently rules the nation. In his remarks during the cross over event at Ehi na Uguru ward 5, Isiala Ngwa LGA of Abia State, Otti explained that his reasons for joining the broom party was “for the good of all Abians”. He also expressed a sound conﬁdence that his dreams of ruling Abia State and of course, transforming it, would be realised in the APC, adding that he was more endowed with a stronger platform than ever.

He further announced that he was entering the broom party with over 400,000 strong supporters who according to him, were earnestly desirous of liberating Abia State from the alleged years of PDP misrule. The development, as expected, caused a shock wave in the political quarters as well as received the outright endorsement from a large section of Abia citizenry.

Before 2019, Otti had in 2015, taken Abia State political sphere by surprise by his near-victory against PDP.

He came second in that year’s polls, scoring 165,406 votes while Dr Okezie Ikpeazu of the PDP scored 248,459 votes. This is in addition to the fact that Otti entered the 2015 race late and was almost a lone ranger in the 2015 and 2019 electoral wars, being the brightest star of APGA then, in terms of funding of the party. He also did well in grassroots, as 11 out of the 24 House of Assembly seats were won by APGA in 2015 while APGA also made some impact in the race for the House of Representatives, thereby conﬁrming Otti’s relevance among the ordinary people.

As he has joined the APC, his chances of becoming the number one citizen of Abia State has heightened. This postulation is not far to seek, judging by the political juggernauts the APC boasts of in Abia which gives Otti an advantage to win the polls in 2023, should he clinch the APC ticket. The presence of Dr Orji Uzor Kalu, chief whip of the senate, Dr Uche Ogah, the minister of mines and steel, Nkeiruka Onyejiocha, the deputy chief whip of the federal house of representatives also provides the astute ﬁnancial expert a solid ground to operate from. This is not forgetting the presence of Hon Ben Kalu, the chairman of house of representatives committee on information, Paul Ikonne, Anyim Nyerere, Mark Wabara, the former Managing Director of defunct Hallmark bank,David Ogba the billionaire founder of Bourdex Group, Senator Nkechi Nwogu, Barr Friday Nwosu, Chief Emeka Atuma, Senator Chris Adighije, Chief Benjamin Apugo and a host of others. and others, the party is now ultimately endowed with a powerful squad. The mathematics here is, if you add the political weight of all the above mentioned politicians now in the umbrella of APC, the PDP might be crushed in 2023 it does not get its act right.

Speaking while receiving Otti on the day the former banker decamped from APGA, Abia State APC chairman, Chief Donatus Nwankpa celebrated the addition of Alex Otti to the growing inﬂux of high-proﬁle individuals into the APC. Nwankpa, while declaring Otti as a big asset, also declared that his party would take over Abia from the current rulers, PDP. Nwankpa assured that his party had corrected every mistake it made in previous elections in Abia, he urged Abians to switch over to APC, having realised the alleged damage inﬂicted on the state by the PDP.

The party supremo further noted that with Otti in APC, the liberation of the state was a done deal. With his key points of industrialisation, attraction of top-notch investors, harnessing of the state’s resources, well structured internally generated revenues(IGR), investment in human resources as well as holistic revolution in infrastructural activities, Otti’s tenacity to the the hope of ruling Abia may still be realised in the 2023 game.

The problem of infrastructural decay in the Enyimba city of Aba, which Otti has always pointed at, made him the darling of Aba traders and other residents. Little wonder, he swept victory in the Enyimba city during the 2015 and 2019 polls. The popular tune in the tongues of many political watchers now in the State is: “If Otti could single handedly shake Abia while in APGA, what will happen now that he has teamed up with the big boys in APC. However, a lot of homeworks still needs to be carried out towards harnessing the shine Otti’s entrance provides for the APC. This involves sustained membership drive as well trying to market the person, quality and visions of Dr Alex Otti, rather than leveraging on the name, APC alone. This is because of the poor perception of the APC in the South East over the poor treatment of the zone by the government in centre. However, the ruling party in Abia, the PDP is not leaving any stone unturned towards remaining in power beyond 2023. The party which lost its former Chairman, Chief Johnson Onuigbo, has held its State congress, electing Chief Alwell Asiforo as the new party Chairman.

Asiforo, former Speaker of Abia State House of Assembly, and from the oil-rich Ukwa area of the State has so far, assumed duty with a promise to make the PDP more powerful. Otti’s former party, APGA has also downplayed the departure of their former number 9 striker. The party in a statement by its national vice chairman , Chief Uchenna Okogbue said that Otti’s exit would not in any way aﬀect the party’s chances in Abia State. Okogbue also faulted the fears in some quarters that the party would lose its spark because of the exit of the ﬁnancial management guru.

From all indications, the move from APGA to APC by Otti, is considered by many as a deft political move that could send PDP packing from the Abia Government House in 2023. This is in view of the fact that the political party at the centre is APC and it is desirous of capturing more states in the South East to make the zone an APC enclave.

However Abia PDP said APC cannot win any election in the state. The party equally noted that the current administration of Governor Ikpeazu has been doing well and so the masses would surely rally round him.

I was responsible for Umahi’s court removal – Wike