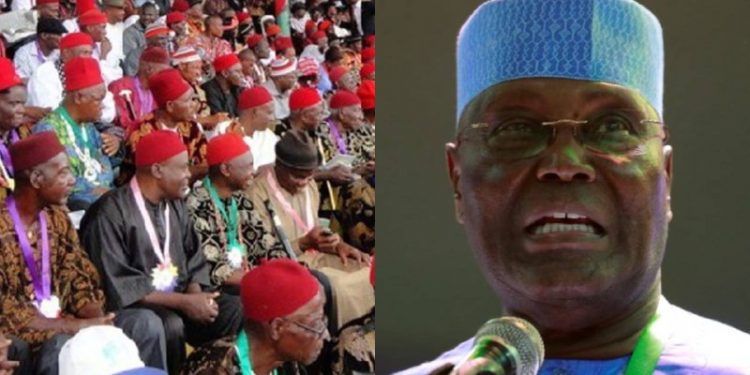 The Ohanaeze Ndigbo Worldwide has described the comment credited to the Presidential candidate of the Peoples Democratic Party in the 2023 general elections, Atiku Abubakar, that he was the stepping stone for Igbo Presidency, was not only laughable, but diversionary.

The Peoples Democratic Party (PDP) , Presidential Candidate Alhaji Atiku Abubakar had during the PDP South-East Zonal Stakeholders’ Meeting in Enugu on Tuesday said he would actualise Igbo presidency if elected in 2023.

However the Secretary-General of Ohaneze Ndigbo, Chief Okechukwu Isiguzoro, while addressing journalists in Abakaliki queried how ‘Atiku can be a stepping stone when all recent polls show him, not even coming next to Obi but a distant third’.

He said that the mock polls so far conducted showed that the Labour Party presidential candidate, Peter Obi, was ahead of the others, saying he was the ‘real unifier’ the country needed currently to heal its myriads challenges. He said, “The Ohanaeze Ndigbo Worldwide, wishes to state that the statement of Alhaji Atiku Abubakar, the Presidential candidate of the Peoples Democratic Party, PDP, in Enugu two days ago, that his presidency would be “a stepping stone” to Igbo Presidency, is laughable and diversionary.

“Firstly, all polls conducted so far show that Mr Peter Obi, the Presidential candidate of the Labour Party, LP, is cruising to victory, not as an Igbo presidential candidate but as the “real unifier” and the face of the Obidient movement, a new Nigeria movement that transcends ethnic, religious and political party divides, like none before it.

“How can Atiku claim to be “a stepping stone” to a futuristic Igbo Presidency when Nigerians had already united across ethno-religious lines overwhelmingly in support of Mr Peter Obi, the Labour Party, Presidential candidate as President of Nigeria, come 2023? This is not merely because of ethnicity but because of what he represents – fresh hope for a New Nigeria?

How can Atiku be a stepping stone when all recent polls show him, not even coming next to Obi but a distant third? “Foremost Nigerian thought leader and aviation entrepreneur and as well the erstwhile Chairman/CEO, 7STAR Hangar/Airlines, Engr Isaac David Balami, captured the mood of the nation two days ago when he said he was endorsing Mr Peter Obi based on 3Cs of Competence, Credibility and Capacity.” He added, “In terms of competence, credibility and capacity, Mr Peter Obi is in a world of his own.

Neither Atiku of the PDP nor Asiwaju Bola Ahmed Tinubu of the ruling party, the All Progressives Congress, comes close to him. Sincerely, Nigerians are really yearning for a third force presidency due to their terrible experience under the APC and PDP Governments since 1999. Engr Rabiu Kwankwaso, FNSE of the New Nigeria Democratic Party, NNDP, even has a stronger presidential profile based on the 3Cs than those of the old Brigade like Atiku and Tinubu.

“Atiku should realise that the Obidient train has left him behind. This is no longer time to talk about Igbo Presidency, Yoruba Presidency, Hausa Presidency, Ijaw Presidency, Tiv Presidency or Fulani Presidency. He should Obidiently listen to Pa Ayo Adebanjo, the Afenifere Leader, who said, “To keep Nigeria one everyone must be Obi-Datti compliant”. As such, he should emulate elder statesmen like President Obasanjo, Pa E. K. Clark, Pa Olu Falae, Hakeem Baba-Ahmed, Gen. T. Y. Danjuma, Rtd, etc to ensure that Nigeria does not miss this unique opportunity for restoration through Peter Obi.

“Secondly, Atiku’s current promise is worth nothing to Ndigbo. In fact, the promise is laughable and diversionary, coming at this time when Nigerians want to interrogate his presidential profile vis-a-vis the 3Cs. Based on weighty allegations leveled against him by Governor Nyesom Wike of Rivers State on serially reneging on his promises, how much is his promise worth?

In 2019, Ndigbo supported him and gave him over 80% of his votes, even when his people rejected him and he could not even win in his State – Adamawa. Yet, he, the Waziri Adamawa carefully dodged signing any written agreement with Ndigbo that he would serve only one tenure. “We urge all patriotic Nigerians to obediently keep faith with Peter Obi based on his 3Cs, not based on ethnicity.”