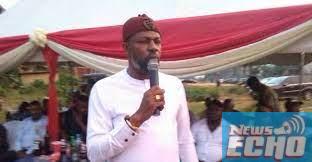 A Chieftain of the All Progressive Grand Alliance (APGA) in Anambra State, Chief Azubuike Austin Ekweozor has expressed hope of a greater Nigeria in 2022.

Ekweozor, stated this on Wednesday at his country home, Umoawulu community, in Awka South Local Government Area of the state, during a Football match competition, organized by Ide Global Movement, to encourage youths on self-reliance.

The APGA chieftain, who said that 2022 is a new beginning for Nigerians irrespective of religious placement and called on other illustrious citizens to bring back their resources home to deepen and expand the development of the state in all economic sectors including sporting.

He expressed satisfaction that Anambra has become a reference point for a progressive state and asked the people to play down on differences to build a more prosperous state, to further reposition the state.

He called for promotion of brotherly love, peace and revival of the great Anambra spirit which Anambra people are known for and wished Nigerians a happy new year.

Speaking further, Ekweozor, noted that the maiden edition of Agbana Umuawulu Unity Cup, sponsored by him, was also part of activities marking this festive season and promoting unity and sportsmanship among youths of the community.