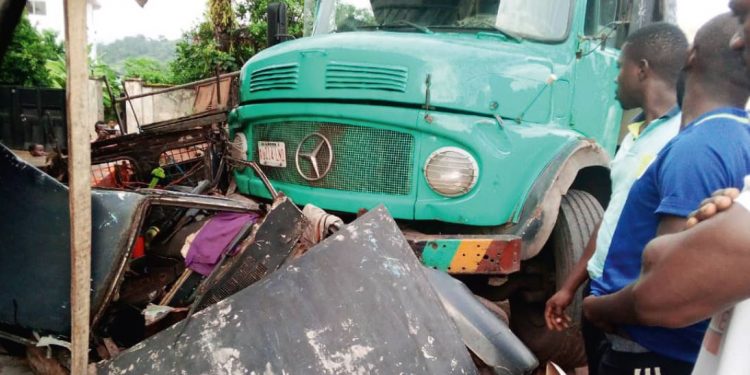 It was a very sad Saturday as two persons lost their lives while four women sustained varying degrees of injury in separate auto crashes in Anambra state.

Conﬁrming both crashes, Ag. Sector Public Education Oﬃcer, Federal Road Safety Corps, Kamal Musa said the body of the deceased were deposited at the morgue after they were conﬁrmed dead by the doctors in the hospital.

He said, “A hit-and-run driver of sky-blue Mitsubishi L300 Bus, whose identity was not captured, knocked down (4) female adults who were crossing the expressway near MCC along Asaba- Onitsha road this evening, Saturday 5th September, 2020.

“According to eyewitnesses, the incident occurred around 15:59hrs. They said the vehicle was on top speed and ﬂed after knocking down (4) Female Adults (3) seriously injured and (1) who allegedly died on the spot were rushed to Toronto Hospital by a ‘good Samaritan’ before the arrival of FRSC rescue team from Upper Iweka outpost who deposited the dead victim at the morgue after she was conﬁrmed dead by the Doctors in the hospital.

“The Sector Commander FRSC, Andrew A. Kumapayi sends his condolences to the deceased family and admonishes pedestrians to endeavor to use pedestrian bridges, to avoid being knocked over by vehicles plying the expressway.

“He also warned drivers against over speeding. A maximum speed limit of 50km/hr is recommended for vehicles within built-up areas.

“At about 0604hrs today, Saturday 5 September, 2020, a fatal Road Traﬃc Crash (RTC) involving a Green 911 M/Benz Tipper driven by a driver whose identity was not disclosed with registration number XU 214 LND and a Peugeot 504 Pickup driven by one Innocent Okolo Udu with registration number AA 635 BB was recorded opposite Peg ﬁlling Station, Enugu-Ukwu, along Onitsha-Awka Old road.

We have failed our children – FG