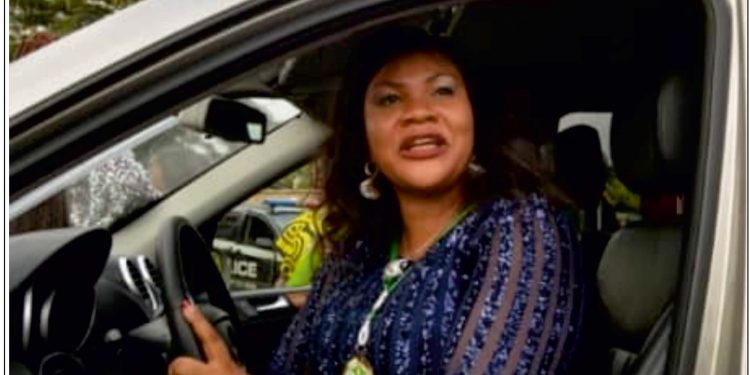 Loveth Egbo, an Onitsha based teacher turned business woman has been awarded with the position of Senior Manager and a Mercedes-Benz SUV by Greenleaf Biotech International.The event had different calibers of people occupy the presidential Hall of All Saints Cathedral, Onitsha last Sunday, August 23, 2020 to witness the glamorous event.In an exclusive interview with the chief awardee, Egbo (Cash Love), noted that when she was introduced to the business one year and six months ago, she was a struggling school teacher. She however took the leap of faith, with the support of her husband and in a short while, all her dreams of travelling the world and living in comfort became a reality. “I am really overwhelmed with what is happening in my life today. I never knew that Í could get to this level in life where I would be travelling to choice countries and driving a car of my own, more so, two SUVs.

“It all started one year and six months ago when I stumbled upon Greenleaf Biotech International through Mr Stanley Ikwuagwu (Baba Cash). I found the wide range of organic based household products of the company interesting and I decided to sign up. “The first few weeks were tough as I could not convince anyone to sign up under me. But my husband supported me and I persisted in advertising the company and the direct marketing rewarding system of the company. I never gave up. “Before you know it, I was invited to travel abroad free of charge. Then, I was awarded my first SUV car. And today, I am awarded with another SUV, this time a Mercedes­Benz. “Mrs Egbo enjoined all who were yet to sign up with Greenleaf Biotech International to do so, as it was the future of global business. However, it was a plethora of testimonies from hundreds whose lives had also been transformed for the better by Greenleaf Biotech International.

Also speaking, Mrs Blessing Stanley (Madam Cash), a Senior Director of the company narrated how she, a school principal on a #25,000 salary and her husband, a banker on a #35,000 salary were deep in debt some two years ago in Lagos before she encountered Greenleaf Biotech. “Our roof was leaking. The landlord was on our neck over backlog of unpaid rent and we were barely able to feed ourselves and our children. Then I encountered Greenleaf Biotech International and I started telling people about it. “At first they were skeptical as they knew I was still struggling to survive. But with the use of the social media, I was able to gain down lines from beyond the shores of Nigeria and today, my husband and I now have two buildings of our own in the same area we lived as tenants.

We have also made hundreds of people millionaires and this year alone, 8 people have qualified for the car award in Nigeria.”Mr Stanley Ikwuagwu, her husband a Director in the company, while reiterating his wife’s testimonies, added that he commissioned another house amidst the Covid 19 lockdown, “a house I built in 6 months, all thanks to Greenleaf Biotech.” He added that the products besides being organic and top notch in quality also come at “amazingly pocket friendly prices.”

“Our competition price­wise is with the road side” he said. Another testified, Peace Ike, a school teacher, narrated how she was suffering from chronic acne on her face which affected her self esteem negatively. “Before now I had nothing to do with business. I preferred salary as a teacher. Over time, I found out that salary cannot help me achieve my dreams. I started using a Greenleaf product and it cleared my acne.

The products helped detoxify my system. Sir Adimora, a business man, in his own submission, stated that he was introduced He said that before then, he had been representing several other companies but that in Greenleaf Biotech, he discovered a system that works wonders with a wide range of great products. “Experience has shown me that Greenleaf is working, it is good business, it pays, and the products are great. Put in your best and once you work, the result will come. It is for all ages. I’m happy doing it because I’m getting paid. “Davidson Orihi, another partner of Greenleaf Biotech International stated that the company gives financial freedom. In his words, “I will never get poor. This is my oil well.

With Greenleaf you can never be broke. If I give u a job, you will still call me for money. But if I show you how you can be earning every day, you will be self sufficient for life.” Greenleaf Biotech lntemationalisan over 20 year old organic based production and direct marketing company from China, was introduced in Nigeria, 2018, and has already produced several millionaires even in the midst of the Corona virus pandemic, said the Country Representative, Mr Bruce Kuo.

Is pen mightier than power?