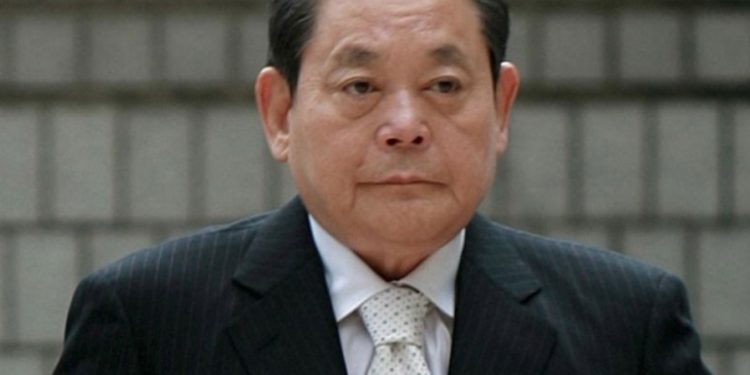 0
SHARES
54
VIEWS
Share on FacebookShare on TwitterShare on Linkedin

Samsung Electronics chairman Lee Kun-hee, who transformed the South Korean firm into a global tech titan, died at the age of 78 on Sunday, the company said.
Under Lee’s leadership, Samsung rose to become the world’s largest producer of smartphones and memory chips, and the firm’s overall turnover today is equivalent to a fifth of South Korea’s GDP.
Samsung’s meteoric rise helped make Lee South Korea’s richest and most powerful industrialist.
“It is with great sadness that we announce the passing of Kun-hee Lee, Chairman of Samsung Electronics,” the company said in a statement.
“Chairman Lee passed away on October 25 with his family, including Vice Chairman Jay Y. Lee, by his side.
“Chairman Lee was a true visionary who transformed Samsung into the world-leading innovator and industrial powerhouse from a local business,” the firm said, adding: “His legacy will be everlasting.”
Samsung is by far the biggest of the family-controlled conglomerates, or chaebols, that dominate business in South Korea.
They drove the nation’s transformation from a war-ravaged ruin to the world’s 12th-largest economy, but nowadays are accused of murky political ties and stifling competition — with Lee himself twice convicted of criminal offenses, in one case bribing a president.
When Lee inherited the chairmanship of the Samsung group in 1987 — founded by his father as a fish and fruit exporter — it was already the country’s largest conglomerate, with operations ranging from consumer electronics to construction.
But it was a shoddy producer of cheap, low-quality products.
“Let’s change everything except our wives and kids,” Lee said in 1993.
The company gathered up and burnt all 150,000 mobile phones it had in stock, paving the way for the rebirth of the highly successful “Any-call” handset.
With Lee at the helm, Samsung became a global behemoth: by the time he suffered a heart attack in 2014, it was the world’s biggest maker of smartphones and memory chips, and a major player in semiconductors and LCDs.
Lee rarely spoke to the media but was closely watched whenever he broke his long silences, often with doom-laden New Year corporate addresses.
His son, Samsung Electronics vice chairman Lee Jae-yong, has been at the helm of the company since the 2014 heart attack.