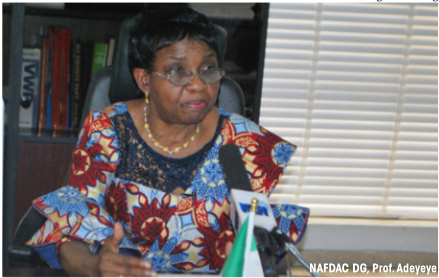 The National Agency for Food and Drug Administration and Control is poised to continue to encourage the Micro, Small, and Medium Enterprises to harness the potential of trade and investment for the nation’s economic growth and sustainability.

The NAFDAC’s Director-General, Prof. Mojisola Adeyeye, made the assertion at the National Trade and Investment Summit in Lagos, reiterating the importance of MSMEs in the development and growth of the economy according to a statement.

She disclosed that NAFDAC, alongside other national stakeholders on the National Action Committee for the implementation of African Continental Free Trade Agreement, was fully and totally committed to its successful implementation once it came into effect.

According to her, this was because of its advantages to Nigeria’s economy and healthy competition it would engender in the operations of MSMEs in the economy’s non-oil sector.

Towards this end, Adeyeye pointed out that NAFDAC was on the train of the NAC Secretariat that was sensitizing and building the capacity of stakeholders, particularly on AfCFTA agreements on Non Tariff Barriers, Technical Barriers to Trade and Agreement on Sanitary and Phytosanitary.

She stated, ”This is in addition to her advocacy on the need to improve all the national and regulatory infrastructures that will reduce the cost of production and make the MSME products competitive in the AfCFTA area.

“All our operations are set and ready to accommodate AfCFTA”.
The NAFDAC DG noted that the economy of Nigeria was undergoing diversification from oil to non-oil products, stressing that the MSME sector would play a critical role to achieve this transformation.

She emphasised that if an enabling environment was provided, MSMEs could get the country out of the present predicament of unacceptable rate of unemployment, illicit financial engagements, insecurity, political and social violence.

”There is a need to recognise their role in employment provision and to encourage, grow and support the sub-sector,” she added.