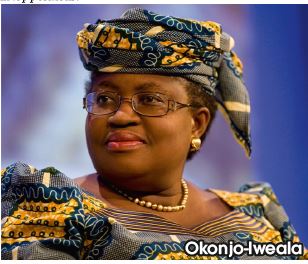 Following President Muhammadu Buhari’s request, Presidents of West African countries have reiterated their commitment to ensure that a Nigerian former minister for finance, Dr Ngozi Okonjo-Iweala clinches the position of Director-General of the World Trade Organization.

They also urged Africa to unite behind her candidacy as the continent’s best option in the hotly contested race.
The leaders expressed the strong show of support during the 57th Ordinary Session of the Authority of Heads of State and Government of the Economic Community of West African States (ECOWAS) which took place recently in Niamey, Republic of Niger.

According to the Presidents who spoke at the event, the focus of the sub-region is to persuade other African countries to support Nigeria’s highly respected pick for the position, one of five candidates who recently scaled the first stage of the WTO leadership hurdle.

Apart Okonjo-Iweala others still in the race for the WTO job is Saudi Arabia’s Mohammad Maziad Al-Tuwaijri, Amina Mohamed of Kenya, Liam Fox of the United Kingdom and South Korea’s Yoo Myung-hee.

ECOWAS had in June endorsed Okonjo-Iweala for the job. The sub-regional body anchored its support for the former World Bank Managing Director based on her track record of high performance and leadership in top positions.

According to the ECOWAS Presidents, Okonjo-Iweala is eminently qualified to head the WTO based on her “long years of managerial experience at the top echelon of multilateral institutions, her reputation as a fearless reformer, her excellent negotiating and political skills, her experience of over 30 years as a developmental economist with a long-standing interest in trade, her excellent academic qualification, her position as Managing Director World Bank, and currently as Board Chair, Gavi, and AU Special Envoy to mobilize financial resources for the fight against COVID-19.”

Unused data to be rolled over, FG orders telecom companies