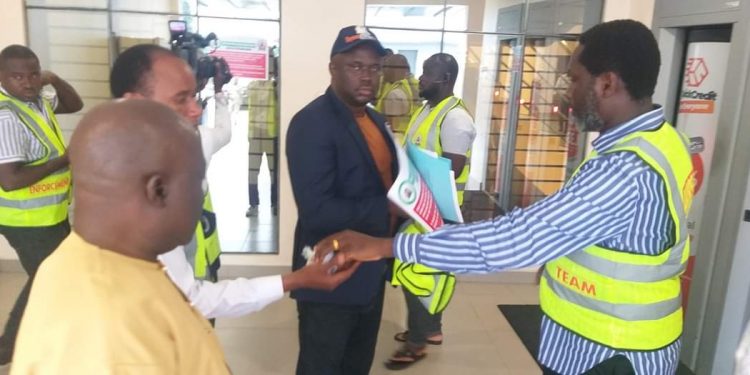 0
SHARES
122
VIEWS
Share on FacebookShare on TwitterShare on Linkedin

About 600 customers of First Bank PLC and Fidelity Bank PLC in Umuahia were on Thursday, stranded following the sealing of branches of the banks by Abia State Internal Revenue Service (AIRS).

The banks, according to a Court Order pasted on the walls of the banks were sealed for allegedly failing to pay Pay As You Earn taxes and other accumulated interests to the Abia State Internal Revenue Service.

A Court order pasted on the walls of First Bank branches in Umuahia alleged that the bank was indebted to the tune of two hundred fifty four million, nine hundred and ninety eight thousand, nine hundred and seventy six naira, thirty kobo .(254,998,976,30)

According to the Abia Internal Revenue Service, a Court ruling obtained on Tuesday, November 30 at Abia State High Court, holding in Umuahia gave the judgement in favour of the Revenue agency.

The Court judgement was presided over by Justice Chido Nwakanma in the case HU/154m/2021.

Similarly, Fidelity Bank PLC was also alleged to have failed to remit over fifty eight million naira Pay as You Earn (PAYE) taxes of employees to the Abia State Revenue agency, thereby attracting the ire of the AIRS.

The situation threw many customers of First Bank out of balance as some of them who spoke to News Echo expressed their disappointment.

The distraught customers complained that their bank was always in tango with the Abia State Internal Revenue Service which usually result to sealing of branches.

A senior Manager at First bank main Branch, Umuahia assured the customers that the situation would be resolved and advised them to use every available Automated Teller Machines (ATM) and Point of Sale (PoS) outposts.

When contacted, a senior staff of Abia State Internal Revenue Service , though under anonymity, revealed that officials of the sealed banks had already approached his office for amicably resolution.