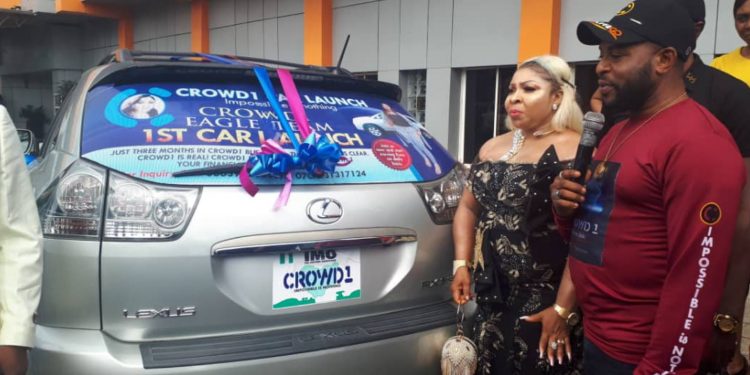 President of Crowd 1 in Nigeria, Ambassador Smart Oluwadola, making a speech before handing over a Lexus car to Pastor (Mrs) Blessing Solomon which he secured after 3 months in the network marketing group

0
SHARES
285
VIEWS
Share on FacebookShare on TwitterShare on Linkedin

Pastor Mrs Blessing Solomon has excitedly given a testimony of how her financial dreams were fulfilled within three months of joining an online networking business known as Crowd 1.

Fielding questions from newsmen in Owerri, she said all she did was believe, join and do the simple things she was told to do, which led to her meteoric rise with commensurate financial gain which culminated in winning a brand new car.

Speaking about crowd one, its first Nigerian president, Ambassador Smart Oluwadola described it as an online mobile business that could be likened to Facebook, Amazon, Google, taxify, UBA with offices in Spain, London, Dubai, Johannesburg, Philippines and extending to Nigerian office and other parts of the world.

He said it has made hundreds of Nigerians millionaires and car owners, even during the lockdown as the business does not require physical contact before it could be conducted.