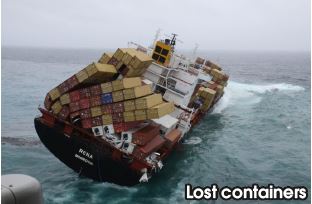 The World Shipping Council has estimated that on average, a total of 1,382 containers are lost at sea each year.

This is according to a report by the global shipping body titled ‘Containers lost at sea – 2020 update’.

The report listed events such as severe weather, rough seas, ship groundings and structural failures as some of the problems which can result in containers being lost at sea.

“With 12 years of data, it is particularly interesting to look at the trend of three-year averages, reported in each of the survey updates.

“This was due in large part to the sinking of the MOL Comfort (2013) that resulted in a loss of 4,293 containers and further impacted by the grounding and loss of M/V Rena (2011) resulting in approximately 900 containers lost.